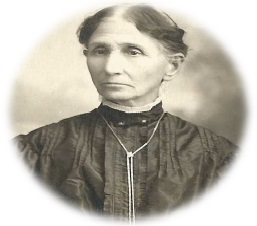 In 1842 Nathan Bond and Elizabeth Trailor hailed the arrival of their second daughter Anna (Angeline Annie Bond), who was born in Greenbush, Illinois. Nathan and Elizabeth would have two more children after Anna, both of which would be boys and both would be born in Iowa. In 1853, when Anna was eleven years old, the family journeyed to Oregon, on the Oregon Trail, with their relative George Bond in the wagon train of Captain Nelson Davis.

After the family settled on a farm in Knox, Butte county, Oregon, and at the age of seventeen, Anna met and eventually married John Gerald Reed in 1859. The couple had four children-- Effa "Lady" Reed, Clifton B Reed, Austin N. Reed, and Elizabeth Reed. Only Austin and Elizabeth would outlive their parents. Anna was blessed with three grandchildren, six great-grandchildren, and two great-great grandchildren. When Anna settled in Knox she saw a need for a school and she and her husband built a log school where she would become a teacher. Anna went on to study medicine with a relative and served the Knox community till they moved to Linn county. where she continued her practice for 30 years.

Dr. Reed was an integral part of Linn county where she became a member of the Women's Relief Corps, Daughters of the American Revolution, Maccabee Lodge, Lebanon Civic club, Woman's Christian Temperance Union, and the Oregon State Equal Suffrage Association. In 1896, Dr. Reed was selected as one of the Chairman of the County Committees of the Woman's Congress which was created to bring as many of the Oregon "patriotic, philanthropic, and literary efforts" under the umbrella of the State Equal Suffrage Association. The Woman's Congress was established in order to push the State Congress to pass the Woman's Suffrage Amendment which had previously been defeated in 1884 and 1894. During the Oregon State Equal Suffrage Association's 26th Annual Convention in 1897 President Abigail Scott Duniway characterized Dr. Reed as, "One of our leading suffragists, Dr. Anna B. Reed of Lebanon, managed the meeting and the men and women of the County assisted her right royally." Dr. Reed was again selected to a prominent position in the Oregon suffrage movement when she was elected Vice President of the Oregon State Equal Suffrage Association in 1909. Thanks to the efforts of Dr. Reed, and women such as her, the Oregon Woman's Suffrage Amendment was passed in 1912; well before the U.S. Congress passed the Nineteenth Amendment in 1920. Dr. Reed died December 3, 1936 in Albany, Oregon and was buried at Riverside Cemetery at the age of 94. Dr. Reed was laid to rest beside her husband of 76 years, who died February 22 of the same year.