Anna Rebecca (Johnson) Simmons was among the most prominent activists in the woman suffrage movement in South Dakota. Known as "a lady of high ability, a powerful and entertaining speaker," observers heralded her "very strong influence on South Dakota politics." She served in many offices, including president of the South Dakota Woman Christian Temperance Union (W.C.T.U.) and president of the state's Equal Suffrage Association (E.S.A.). The height of Simmons's advocacy for woman suffrage occurred in the 1890s. She led two (failed) campaigns, the first in 1894 to increase women's school suffrage rights by allowing them to vote for all school officers and the second, in 1898 to grant women full enfranchisement. Simmons worked for additional progressive causes. Notably, in 1900, Simmons served as the secretary of an investigation into malpractice at South Dakota's asylum in Yankton. She spent time living in the asylum to personally observe the conditions of patients and gave a glowing review of the facilities.

Anna R. Simmons was born in Nashville, Ohio on 7 October 1848. She moved to Iowa with her parents and earned a degree from Cornell College in Mt. Vernon, Iowa, where she likely met her husband Thomas Simmons, also born in Ohio, eight years her senior. They married in 1873 and moved to a farm near Faulkton, Dakota Territory, around 1884, where their friends and fellow suffrage advocates Alice M. A. Pickler and John A. Pickler lived. The Dakota Annual Conference of the Methodist Episcopal Church appointed Simmons's husband "missionary for Faulk County" in 1885. As a result of a new assignment as a Methodist elder, the Simmonses moved to Huron in 1893, where they lived for six years. The two also spent some period of time in Mitchell. The Simmonses had one child, Corwin, when Anna was about 42 years old; an 1885 Iowa census lists two additional children in the household, Ethel age five and Everett age one.

The earliest reference to Simmons's advocacy places her at the 1884 W.C.T.U. national meeting in St. Louis; she held the office of Superintendent of Juvenile Work for the Dakotas. In 1894, Simmons became the state president of the Union and served in official roles for six years, during which time she simultaneously served as president of the South Dakota Equal Suffrage Association. Simmons worked tirelessly from 1893 to 1900 on behalf of woman suffrage, lobbying members of the state's legislature and speaking across the state. Simmons noted the "empty treasury," twenty public addresses, few local clubs, and overall low state membership of the E.S.A. in the first year of her presidency and the rise, by 1896, to some sixty equal suffrage clubs with a membership of 700 and almost $300 raised and spent that year on the promotion of woman suffrage. She also organized clubs and spoke on behalf of suffrage in Missouri, Nebraska, and Iowa.

At the 1896 National American Woman Suffrage Association (N.A.W.S.A.) annual meeting in Washington, D.C., Simmons spoke before the Judiciary Committee of the United States House of Representatives. At the same meeting, Simmons and Charlotte Perkins Stetson offered (failed) amendments on the controversial proposed resolution to disavow connection with Elizabeth Cady Stanton's "so-called 'Woman's Bible,' or any theological publication." Simmons voted with the majority for the resolution, despite "a long and animated discussion" and a plea from the president of NAWSA. against the censorious resolution. At the 1898 annual NASAW convention a confident Simmons "presented the case of South Dakota," while Carrie Chapman Catt moved that the national organization raise $5,000 to support the state's referendum campaign that year.

Simmons stepped down from the presidency of South Dakota's E.S.A. in 1900, but she continued to hold office in the W.C.T.U., an organization she had supported since 1878. She became president again in 1909 and held that position most years through 1917. Simmons advocated for a "bone dry" policy in South Dakota, that is, for laws to prohibit "the right of any person to keep even a limited supply of liquor in his possession for beverage use." She continued to advocate for both suffrage and temperance, though she had long struggled to separate the reform issues. After failing both to stop legislation favorable to "the liquor business" and to advance a women's ballot measure by only one vote, she said "[we] might as well go out . . . and try to dam the Mississippi or the Missouri River with our bare hands." She thought that the state legislators assumed that W.C.T.U. women wanted suffrage only to advance prohibition but she insisted that "true women" wanted suffrage for many reasons. Tellingly, in 1898, Simmons reported to NAWSA., "Our State Association is determined that our work shall be carried on separate form all other issues." In 1909, she helped quell ultimately "groundless" fears of potential "friction between the members of the W.C.T.U. and the Equal Suffrage Association." In 1914, she announced the W.C.T.U. annual meeting would feature "the start of a statewide campaign for woman suffrage," as the state's voters prepared to promote a fourth (failed) referendum on woman suffrage. Simmons' dual commitments to woman suffrage and prohibition represented a common pattern for the woman suffrage movement on the Northern Great Plains. Plainswomen often came to the suffrage cause first through W.C.T.U. Enfranchise Departments and unlike some national suffragists, such as Susan B. Anthony, continued to believe their support of temperance and prohibition attracted as many votes as it repelled others from the woman suffrage cause.

Soon after South Dakota approved woman suffrage in 1918, Simmons wrote of her weariness, but she joined the League of Women Voters and when the South Dakota state legislature ratified the Nineteenth Amendment on December 4, 1919, she appeared at the capitol in Pierre to celebrate with her colleagues. Already around 72 years old, Simmons seems to have spent the majority of her remaining long life quietly. Anna Rebecca Simmons died 23 May 1936 in Davison County, probably in Mitchell. She was buried next to her husband at Woodlawn Cemetery, in Sioux Falls, South Dakota. 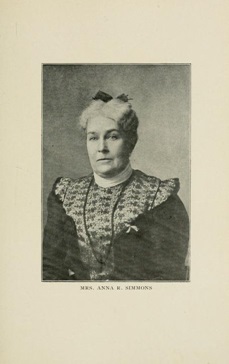 Baker, Noelle A. Stanton in Her Own Time: A Biographical Chronicle of Her Life, Drawn from Recollections, Interviews, and Memoirs by Family, Friends, and Associates. Iowa City: University of Iowa Press, 2016, p. 175.

"S.D. Republicans Give Expressions for Gov. Norbeck," Argus-Leader, Sioux Falls, South Dakota, 28 Oct 1920, p. 3. In return for his support of "women's enfranchisement" and other "moral reforms," and his call for a "special session of the legislature to ratify the federal women suffrage amendment," Simmons urged women voters to elect Governor Peter Norbeck to represent South Dakota in the U.S. Senate in the election of 1920.