Alice Mary Alt Pickler worked determinedly to bring woman suffrage to Dakota Territory and in South Dakota through seven equal suffrage campaigns, including one to advance school suffrage rights. Often leading devotional exercises at meetings, she served in major roles from before the founding of the South Dakota Equal Suffrage Association (S.D.E.S.A.) in 1889, serving as vice president of that organization for several years in the 1890s and as president for most of the first decade of the twentieth century. Pickler also held leadership positions in the Woman Christian Temperance Union (W.C.T.U.) and the Woman's Relief Corps (W.R.C.), the women's auxiliary of The Grand Army of the Republic.

Alice Alt was born in Johnson County, Iowa, near Iowa City in 1848 to Joseph and Eliza Alt. At the age of 14, she began a six-year college career at Iowa State University, where she met her husband John Pickler. They married on 16 November 1870. The Picklers moved to Ann Arbor, where he then graduated from University of Michigan Law School in 1872. The two lived for about two years in Kirksville, Missouri, where his parents lived and then in Muscatine, Iowa. The couple had three children while in Iowa: Lulu Alberta (1871) and Madge Emily (1878), and Alfred Alt (1882) and another daughter, Dale Alice (1887), after they moved to South Dakota.

In 1882, the Picklers moved to Dakota Territory, where they filed on government land, helped found the town of Faulkton, and began advocating for women's voting rights. John Pickler served in the territorial legislature; in 1885 he introduced a suffrage bill that passed both house and council but failed by the veto of the recently appointed Governor Gilbert Pierce. (Pierce feared such a bill would hinder the territory's bid for statehood.) Alice Pickler promoted suffrage at the 1885 South Dakota state constitutional convention. As a member of a delegation of the Franchise Department of the W.C.T.U., she spoke on behalf of suffrage and presented women's petitions at the 1887 state legislature.

South Dakota joined the Union in 1889 with limited school suffrage rights and a constitutional mandate to vote by popular referendum at the 1890 election on whether the word "male" should remain in its new constitution. Both Picklers worked tirelessly to convince the electorate women should vote; they cited women's tax-paying through landownership as a main argument for recognizing woman suffrage rights. In 1890, the two traveled as delegates to the National Women Suffrage Association convention in Washington, D.C. and urged monetary support for the South Dakota suffrage campaign. The convention named Susan B. Anthony as head of a resulting South Dakota fund. Alice Pickler travelled throughout South Dakota giving speeches on suffrage and promoted talks of prominent suffrage speakers, such as Chicagoan Marion Drake, among others, in the state. In August 1890, Pickler and her husband, and the national suffragists Anthony, Henry Blackwell, and Anna Shaw, all attended South Dakota's Republican convention to urge the adoption of a suffrage plank in the party's platform. Although organizers shunted women to the back of the convention, allowing them to speak only during convention recesses, John Pickler spoke on behalf of such a plank, even though some thought it might hurt his political campaign for the United States House of Representatives. The plank (and the 1890 referendum on suffrage) failed, but Pickler won his office. In a speech in 1891, Alice Pickler attributed the suffrage loss in part to the rise of the Populist Party and the subsequent hesitancy of it and the Democrat and Republican parties to commit to suffrage for fear of losing votes in the intense party competition.

A committed member of the Methodist Episcopal Church, similar to many in the state, Pickler saw little conflict and much purpose in combining her advocacy for temperance and woman suffrage. The N.W.S.A., and later, the National American Woman Suffrage Association (N.A.W.S.A.), especially as represented by Anthony, believed suffrage and temperance advocacy should remain separate. Even so, Pickler and Anthony had a good standing relationship and Anthony was known to stay with the Picklers when she was in the area. Pickler served as a delegate to the N.A.W.S.A. convention in Washington, D.C. in 1893 and in Baltimore in 1906. Nevertheless, Pickler continued to speak on temperance and suffrage as one topic. In 1905, she gave an interview about how the S.D.E.S.A. would give priority to temperance over suffrage. According to Pickler, a petition of 12,000 names secured by W.C.T.U. members and presented to the 1909 state legislature secured passage of a woman suffrage amendment to be voted on in the following year. In 1910, a year that saw the third vote for a woman suffrage amendment to South Dakota's constitution, Pickler stepped away from leadership because her husband grew ill and later died. Although the state E.S.A. in its last decade attempted to focus solely on suffrage, Pickler stayed active in the W.C.T.U. never stopping her support for suffrage while working for temperance and Prohibition. In 1914, the W.C.T.U., for which Pickler served as vice president, replaced its regular annual meeting church service with discussion of woman suffrage and in 1915, pledged to vote for equal suffrage and prohibition in advance of the fifth (failed) referendum in the state in 1916. She became active in in 1917 in the state branch of the National Woman's Party and saw success in South Dakota's sixth referendum on woman suffrage in 1918. In 1920, the state's Women's Federated Clubs elected her vice president.

Alice Pickler died on 31 March 1932 while visiting her youngest daughter in Mission, Texas. She and her husband are buried in the Faulkton Cemetery in South Dakota.

Photographs of Alice Pickler can be found in 1) Sommers below, 2) "Dakota Images" below, and 3) C.H. Ellis & Wittmayer below. 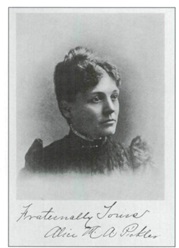 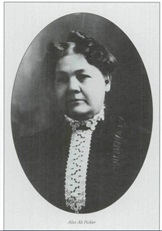 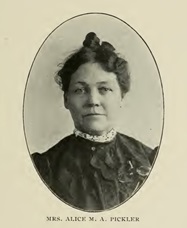