Woman suffragist and Farmers' Alliance member, Sophia Harden was born in Gainesville, New York, on August 7, 1846, to Elnathan and Cynthia Marsh, both of New York. As the oldest of four daughters, she lived on the family farm where her mother identified herself on the census as a housekeeper. She attended Gainesville Female Seminary. Sophia Marsh married the Civil War veteran James W. Harden, twenty-three years her senior, on September 10, 1868. The couple resided in Leicester, New York, but soon moved to Michigan and then to Osage, Iowa, where James Harden served as a school principal. In Osage, Sophia Harden became active in woman suffrage and edited a column in a local newspaper advocating woman suffrage.

In 1883, the Hardens took a homestead near Woonsocket, in Jerauld County, Dakota Territory, where they shared responsibility for farm production. Sophia tended to "all the details of farm work" and animal husbandry regularly and in her husband's absence. Farming united Harden and her husband's political views and they became active members of the Populist Party and especially the Farmers' Alliance, which organized in Dakota Territory in 1884. A February 1889 meeting of the Farmers' Alliance saw Sophia Harden elected secretary-treasurer of the organization, a position she held for three years. Local newspapers record Harden letters requesting dues from Alliance members and discussing the organization's salaries. She defended her ideas in the Wessington Springs Herald, demanding once the newspaper retract a misstatement or cancel her subscription. In retort, the newspaper criticized her, saying she "gives no excuse for the bitter, unladylike language used, which certainly is neither a credit to her nor the cause she represents." Fellow suffragist Nettie Hall wrote of Harden's "executive ability," "scholarly wisdom," and "graciousness" countering the latter's "Amazonian" reputation. Harden spoke on the role of women in the Farmers' Alliance during the 1889 Beadle County Fair in Dakota Territory, where the Hardens had moved (to Huron).

Harden also served as the vice-president of the South Dakota State Equal Suffrage Association from 1890 to 1892. Previously, Harden served as president of Osage, Iowa Woman's Suffrage Association. There she edited a newspaper column supporting equal rights. She frequently addressed conventions on the topic of women's equality, including the June 1890 state Democratic Party convention held in Aberdeen; she attended as part of a delegation urging the Party (unsuccessfully) to adopt a woman suffrage plank in its platform. Harden also served as a delegate to the national suffrage convention in Washington, D.C., in 1890.

Sophia Harden, a member of the Congregational Church, died in 1921 at Lane, in Jerauld County, South Dakota, where her husband James Harden died in 1907. Harden had three sons, two adopted.

A line drawing of "Mrs. Sophia M. Harden" can be found in W. Scott Morgan, History of the Wheel and Alliance and the Impending Revolution. St. Louis: C.B. Woodward Company, 1891 p.341. 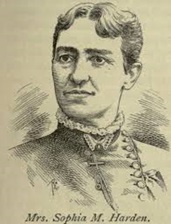