Born in Pennsylvania in 1842 to an abolitionist father and socially connected mother, Marietta Matilda Wilkins rose to prominence as both a contentious supporter and later, a vocal critic of woman suffrage in South Dakota. An advocate for woman suffrage for a majority of her life, the rising political tensions of both the suffrage and temperance movements led her to shift her views regarding suffrage, damaging the South Dakota woman suffrage movement and her relationship with both suffragist Susan B. Anthony and Frances Willard, president of the Woman's Christian Temperance Union. Bones dedicated her life to women's rights and concerns, including work with the Women's Relief Corps and advocacy of divorce law reform.

After moving to Iowa with her family as a young girl, Marietta received an education at the Huidekooper Seminary. She married Kendall Parker, and they had three children together, but his abuse toward her led to their divorce in 1876. The court granted Marietta custody of the children, but did not award any financial support, even the right to assets acquired before marriage, an experience key to her interest in greater rights for women.

Marietta remarried in 1881 to Civil War veteran Colonel Thomas Bones. The two and Marietta's three children moved to Webster, Day County, Dakota Territory, where Colonel Bones served as clerk of circuit court with Marietta as his deputy. In 1881, the National Woman Suffrage Association (NWSA) elected Bones vice-president for Dakota Territory, a position she held for the next nine years. Bones debuted as a powerful public speaker in 1882 and in 1883, she addressed the Dakota Constitutional Convention hoping to convince delegates to leave the word "male" out of the proposed state's constitution. Eventually, she urged both houses of the U.S. Congress to deny South Dakota's entry into the Union if the state failed to recognize woman's equality. In 1885, she addressed the Dakota Constitutional Convention through a letter to its delegates, after which the Yankton Press and Daily Dakotaian mocked the idea of women in politics claiming Bones' pregnancy, which hindered her attendance, showed why it would be difficult for women to serve in politics.

Bones also served as president in 1888 of the local Webster chapter of the national W.C.T.U., but the chapter expelled her in 1889 after she opposed Willard's proposal to link the organization with the Prohibition Party. Bones sought to end the working relationship between the W.C.T.U. and both the NWSA and the state suffrage organization. Tensions between the national suffragists, particularly members of the NWSA, and Bones began to grow when the former agreed to merge with the American Woman Suffrage Association (AWSA) in February 1890. The merger eliminated Bones' role as vice-president of the NWSA for Dakota Territory, a point about which Susan B. Anthony wrote rather insensitively to Bones. Outraged, Bones openly criticized Anthony and accused her of misappropriating funds meant for the 1890 South Dakota suffrage campaign, which failed at the polls. South Dakota newspapers made a mockery of this very public feud among suffragists. Bones thought Anthony had become too tyrannical, a belief that led her to oppose woman suffrage beginning in 1892 until her death in 1901.

The damage Marietta Bones wrought with her vocal opposition became perhaps her greatest legacy to the woman suffrage movement in South Dakota. As leader of the opposition movement, she wrote defaming letters against enfranchisement that required answering. Arguing in a Hot Springs Weekly Star article that women did not want the right to vote, Bones suggested a scenario some women found compelling, explaining: "a woman may be at home engaged in maternal duties, caring for a young and helpless family, whose husband might have political aspirations that a spinster or barren woman might join him in. You can see what great destruction this would cause to society." Suffrage proponents argued women did indeed desire the right to vote, but the constant back and forth exhausted suffragists. South Dakota referenda on woman suffrage in 1894 (to expand school suffrage rights) and 1898 also failed.

Bones and her family relocated to Washington, D.C. around 1900, where she continued to denounce women's enfranchisement until her death in 1901.

A photograph of Bones can be found Willard and Livermore, eds., A Woman of the Century: Fourteen Hundred-seventy Biographical Sketches (Buffalo NY: Charles Wells Moulton, 1893), p. 104-105. 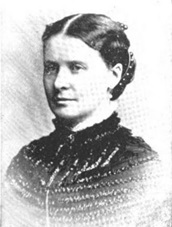