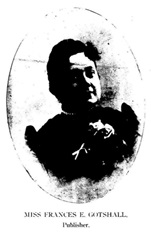 Frances Eleanor Gotshall was born in Illinois in 1868 and died in Portland, Oregon, in 1940. Her father, John Frick Gotshall was born in Ohio in 1832. Mother Caroline A. Gotshall was born in New York in the 1830s. John and Caroline Gotshall had 12 children, three of whom survived into adulthood. The Gotshalls lived in various Portland residences after they moved to the city in the 1880s. In their adulthood, brothers Jeremiah and Lucius Gotshall lived with their families in Portland. Frances lived with her parents at 61 E. 27th N. Portland, Oregon, until her father's death in 1897. After the senior Gotshall's death, Frances lived with her mother and her mother's nurse, Ethel. Ethel Mills was born in Iowa in 1898, and lived with the Gotshalls until Caroline's death in 1921. At age 48, Frances married Charles M. Robinson who was born in 1864 in Illinois. Robinson was a carpenter before he worked with Frances as a linographer for the Gotshall Printing Company.

Frances, Lucius, and Jeremiah Gotshall worked for their father at Gotshall Printing Company until his death. In 1897. Frances became the company's head, and was the first woman in Oregon to head a publishing company. Frances inherited a publishing company from her father, and a long familial tradition of political involvement. Her mother, father, grandmother, and aunts were all White Ribboners, proponents of the 19th century Temperance Movement. Frances, too, saw temperance as a means of preventing violence against women. Frances was also a secretary and member of Oregon State Equal Suffrage Association (OESSA), and member of Portland's Woman's Christian Temperance Union (W.C.T.U.). Gotshall was also a founding member of the Portland Woman's Club, and treasurer of the Oregon Women's Press Club.

Through Gotshall Printing Company, Gotshall was publisher, editor, and founder of Portland's Pacific Empire's first three volumes, from August 16, 1895 until February 11, 1897. Pacific Empire was a woman's weekly newspaper, termed a "women's suffrage paper." Gotshall returned as the newspaper's editor in 1898, its final months of publication.

Gotshall continued her work with Duniway and other suffragists as a member and corresponding secretary of the Women's Suffrage Club. Gotshall also attended the Congress of Women Convention of 1896, which was based in Portland. Gotshall's involvement with Portland's suffragist community began in 1890, reinforcing her status as a pioneering force in Oregon's suffragist movement. In 1912, Gotshall was still plotting strategy for the successful Oregon suffrage referendum held that year.

Gotshall was described as an esteemed businesswoman, possessing a "rounded out Christian character," in spite of the harshness of the business world. Gotshall spent much of her adulthood in and out of sickness, although she maintained a "sweet and modest" disposition. She believed in equal suffrage for men's sake as well as women's, and embraced the temperance movement as a way to mitigate violence against women.

Lake, Randall A. "'WOMAN IN JOURNALISM' – CIRCA FEBRUARY-OCTOBER, 1897." "SHE FLIES WITH HER OWN WINGS" THE COLLECTED SPEECHES OF ABIGAIL SCOTT DUNIWAY (1834-1915). Annenberg School for Communication and Journalism, n.d.