Virginia Darlington was born August 16, 1850, in Zanesville, Ohio, to James and Margaret Elizabeth Darlington. Virginia Darlington was educated at Putnam Female Seminary and graduated with distinction around 1871. Darlington continued her education by traveling three years in London, Berlin, Paris, and Vienna. In 1876, she married Arnold Green, a Canadian immigrant who at the time was serving as clerk for the Ohio State Supreme Court on the Democratic ticket. The Greens lived in Cleveland. The couple had one son, Darlington Green, who died as a teenager of spiral meningitis on May 20, 1909. The year was a challenging one: Arnold Green died on June 16, 1909, from complications of a previous stroke. Both were buried in Woodlawn Cemetery in Zanesville. Widowed and childless, Virginia Green focused her energies in her community on issues like woman suffrage and education in Ohio.

According to one biographer, Virginia Darlington Green was "a pioneer in Ohio of woman's suffrage." She was a member of the National American Woman's Suffrage Association, and she supported the woman's suffrage party when it was organized in Cleveland. In 1912, along with Florence Allen, who would later become the first woman appointed to the Ohio Supreme Court, Green traveled throughout Ohio, teaching the doctrine of woman suffrage to anyone who would listen on behalf of the Ohio Woman's Suffrage Association.

In 1912, Virginia Darlington Green was elected as a member of school board for Cleveland Public Schools, where she served for the next seventeen years. During her time on the board, she promoted initiatives for education reform. Green advocated to finance school playgrounds, to create public kindergarten, to increase teachers' salaries, and to utilize schools as community centers for polling and voting as well as for community events in public school auditoriums.

In 1922, Virginia Darlington Green ran for the United States Senate in Ohio, the first woman from Ohio to do so. She ran as an Independent protest candidate. The Cincinnati Enquirer quoted Green after the election: "My campaign was one of protest against the inordinate and excessive use of money in buying elections and a protest against the use of political power." She criticized both the Democratic and Republican candidates as problematic given their entrenchment in money and big business. Since women now had the vote, Green felt that it would be good for them to take a stand against such methods. She lost the election but claimed in the same Enquirer article that had she similar funds to the other candidates, she would have won.

Virginia Darlington Green also promoted world peace and opposed military training in public schools. She was a member of the Women's City Club of Cleveland, the Consumers League, and served on the board of directors for the local Children's Fresh Air Camp.

Virginia Darlington Green died on April 19, 1929, in Cleveland. She was buried in Woodlawn Cemetery in Zanesville. 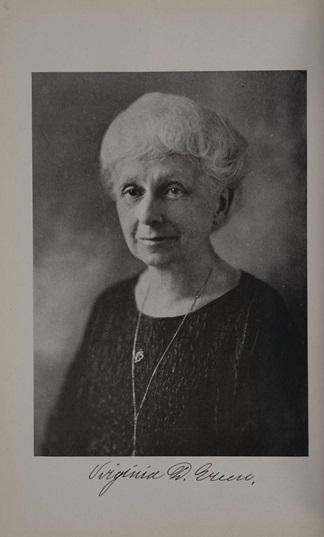