Exercising excellent organizational, political, and people management skills, suffragist Mary ("Mamie") Shields Pyle led the effort that saw South Dakota's voting population finally approve woman suffrage by referendum. As president of the South Dakota Universal Franchise League (SDUFL) from 1911 to 1918, Pyle developed and directed campaign strategies that countered a strong and well-funded opposition. After failing to amend the state constitution in five attempts between 1890 and 1916, South Dakota suffragists finally succeeded at the ballot, with 63 percent of the voters approving a suffrage amendment in 1918.

Born in New Jersey on 28 February 1866, Mary Isabella Shields moved with her family to Minnesota and then, as a young adult, to Dakota Territory. Working as a teacher near the city of Miller, she met the young lawyer John L. Pyle, and they married on 26 May 1886. Three years later, the family moved to the city of Huron, South Dakota, where she lived out her life.

Pyle and her husband entered political life when he won election as the South Dakota Attorney General in 1898. Committed to bringing higher education to their community, the couple helped found Huron College, where her husband served as first president of the board. Sadly, John Pyle died of typhoid fever in 1902, leaving his widow to raise their four children, John, May, Nellie and Gladys, then ages fourteen, twelve, eleven, and ten. Upon her husband's death, Mamie Pyle assumed his role as trustee of the college and served in that position throughout her life.

Soon after her husband died, Pyle personally experienced the inequity of voting laws. Her daughter Gladys remembered her mother watching a group of men, non-citizens with voting rights, walk past her home on their way to vote (South Dakota was one of six states that allowed a male immigrant to vote after declaring an official intention to become a United States citizen). She said, "if they can vote taxes on me, well, I can vote too."

After the state's 1910 full suffrage amendment failed, discouraged suffragists sought a fresh face for their movement and elected Pyle as their new president. The following year, Pyle called for a suffrage convention where she disbanded the old organization and created a new one, the South Dakota Universal Franchise League. Recognizing that entwining the temperance cause with the suffrage cause created a powerful enemy in the liquor lobby, Pyle pursued a policy that separated the two causes. She developed offensive strategies to counter anti-suffrage sentiment and increase support among male voters. Pyle managed the last three campaigns, in 1914, 1916, and 1918, gradually building support for suffrage until finally achieving victory. In 1918, South Dakotans voted on Amendment E, also called the Citizenship Amendment, which combined woman suffrage rights with the elimination of non-citizen voting in the state.

Pyle's view that suffrage and temperance should be separated mirrored that of the National Woman Suffrage Association (NAWSA), by 1915, headed by Carrie Chapman Catt. Sharing similar traits, organized, determined, focused, diplomatic, and politically astute, Catt and Pyle became friends and worked well together (prior South Dakota suffragists had often clashed with national suffrage leaders). Pyle represented South Dakota as a delegate to three national conventions in 1915, 1917, and 1920. NAWSA recognized Pyle's contributions to the cause by naming her to their Honor Roll on February 16, 1920.

After the victory, Pyle remained politically and civically involved. She helped transform the state's suffrage organization into the League of Women Voters and was elected its first president. She and the new organization lobbied for a special session of the legislature to ratify the Nineteenth Amendment, which occurred on December 4, 1919. In the first election where women in South Dakota voted for President of the United States, the state Republican Party chose Pyle as a presidential elector, making her among the first, one of seven women nationwide, to hold that position in 1920. Pyle also participated in efforts to pass the 1923 Equal Rights Amendment. During her life, she remained active in Huron college, the YWCA, the Red Cross, and other civic organizations. Pyle's daughter Gladys Pyle went on to become the first female legislator in South Dakota and the first Republican female elected to the United State Senate. Mamie Pyle died at the age of 83 on December 22, 1949. The home her husband built in 1894, never updated or remodeled, opened as the Pyle House museum in 1987.

A photograph of Mamie Shields Pyle can be found in "Dakota Images: Mary I. Pyle." South Dakota History 8, no. 1 (1977). https://www.sdhspress.com/journal/south-dakota-history-8-1/dakota-images-mary-i-pyle. 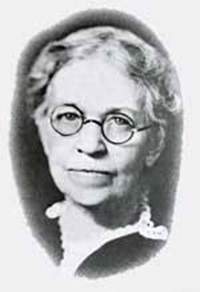