Ann M. Jewett was born Ann Maria Yerrington in Providence, Rhode Island on December 14, 1837. She was the daughter of Maria A. Daggett, a homemaker, and Barker T. Yerrington, a jeweler and engraver. Jewett had two older siblings—a brother, James, and a sister, Catharine. Yerrington, who was normally referred to as "Annie," studied to become a teacher and graduated from the Rhode Island Normal School, the predecessor of what is now Rhode Island College. Note: different records use "Ann," "Anne," "Anna," and "Annie" as her name, but Ann appears to be her official name. She worked as a schoolteacher and then was appointed principal of the Scott Street Primary School in Providence in 1865, at twenty-eight years old.

In 1869, Yerrington married William P. Griffin, a metal engraver from Attleboro, Massachusetts. They were married by Reverend Anna Garlin Spencer, a famous Rhode Island minister and suffragist. The couple lived in Providence and one year after their marriage, their only child, a son named Henry Irving Griffin, was born. By the 1880s, the Griffins were living with her family members in Providence. The family history is somewhat unclear after 1885. It seems that the Griffins moved to Knoxville, Tennessee. Their son, Henry Griffin, died of a long illness in 1893, while he was briefly living in Eagle Pass, Texas. Anne Griffin's husband, William P. Griffin, died in Knoxville in 1895. By 1900, she had moved back to Providence, Rhode Island and was living with her brother and his family.

In 1900, Griffin became involved with the Rhode Island suffrage movement. In October 1900, she was elected recording secretary of the Rhode Island Woman Suffrage Association (RIWSA), a position she held for ten years. As recording secretary, Griffin kept minutes on RIWSA meeting, wrote reports on their activities, and disseminated the reports to members and affiliated organizations, including the New England Woman Suffrage Association, and the National American Woman Suffrage Association (NAWSA). She was also appointed chair of RIWSA's finance committee and a member of its ceremonies committee in 1900. In addition to her RIWSA work, in the early 1900s, Jewett was a member of the religious society of Bell Street Chapel in Providence and served on its practical work committee.

In 1901, a year after becoming the RIWSA recording secretary, Griffin got remarried to Joseph Henry Jewett, a silversmith who had served for the Union during the Civil War. The History of Woman Suffrage includes details about her RIWSA work under the names, Annie M. Griffin and Anne M. Jewett. Joseph Jewett died in 1905. When he died, The Woman Citizen, a RIWSA publication, referred to him as a "courteous gentleman who accompanied his wife and niece to our public gatherings, and who seemed proud of the position they accompanied among us." After his death, Jewett took a year-long break from her suffrage activism. As a widow, Jewett shared a residence with her niece, Sarah Jewett, who was also a member of RIWSA, and both women worked as "fancy cooks" for the Grocer's Exchange in Providence.

In addition to her work in the RIWSA, Jewett was active and served in leadership positions for regional and national suffrage organizations. She served on the Rhode Island executive committee for the New England Woman Suffrage Association from 1904 to 1917. In 1904, 1906, and 1908, she served on NAWSA's national executive committee. She may have been on these executive committees for additional years, but these ones are the only ones that are documented. Jewett attended the 1906 NAWSA annual convention in Baltimore as a Rhode Island delegate and was appointed to its resolutions committee. Afterward she gave speeches at RIWSA and local suffrage branches about her experiences at the convention

As a RIWSA officer, Jewett took part in lobbying for woman suffrage. In 1902, Jewett served on a committee with Ardelia Dewing, and Jeannette French, two other Rhode Island suffrage leaders. The women were tasked with creating a survey that would be sent to prominent men and women in Rhode Island to obtain their opinion about "the Constitution of the United States regarding the power of state legislatures to grant to women the power to vote for Presidential Electors." This effort was part of a longstanding RISWA campaign to secure women the right to vote in presidential elections. Later, in 1905, when a presidential suffrage bill was being considered by the Rhode Island legislature, Jewett testified about woman suffrage to a Senate committee and was a constant presence at the State House, from the time the bill was introduced until it failed. In 1905, she also served on a RIWSA committee that lobbied for and supervised a proposed piece of legislation that would give fathers and mothers equal guardianship over minor children.

In October 1910, Jewett resigned as RIWSA secretary and gave her last report. The Providence Journal reported that:

she referred to the harmony and good will manifested in the work in general. She alluded to her 10 years of service and said that during the last half of this period the cause has made gains, among which have been the establishment of the College Equal Suffrage League, an awakening interest on the part of city teachers and recognition gained from the press and the public.

At the meeting she was presented with a bouquet of yellow chrysanthemums in honor of her decade of service. After resigning the secretary position, Jewett continued as a RIWSA leader. In 1910 she chaired RIWSA's press work committee, which was responsible for publicizing RIWSA and woman suffrage issues in the media, and was elected RIWSA treasurer in 1911.

A presidential suffrage bill was finally passed by the Rhode Island legislature in 1917, fifteen years after Jewett first experience lobbying for it. In 1920, when Jewett was eighty-three years old and twenty years after the beginning of her suffrage career, the woman suffrage amendment was ratified and added to the U.S. Constitution. When the suffrage amendment was passed in Rhode Island in January 1920, a celebratory dinner was held. Jewett attended the event and was referred to as one of the "pioneers" of the Rhode Island movement in an article in the NAWSA publication, The Woman Citizen.

Jewett died of heart disease in Providence on November 26, 1927. She was one month away from her ninetieth birthday. She is buried in the North Burial Ground in Providence, Rhode Island. 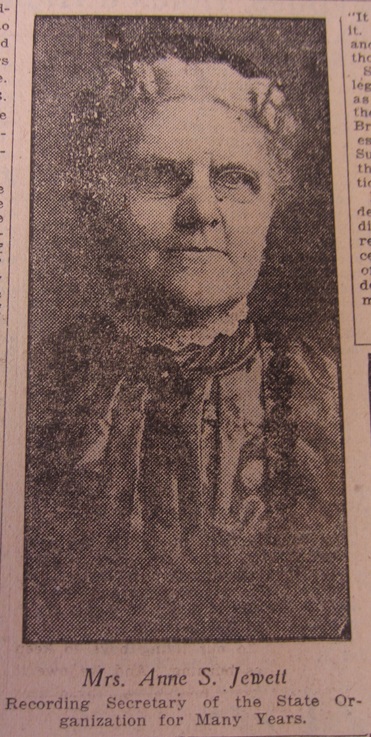