Frances Jennings was born on April 23, 1840, to Charles C. and Mehitabel Park Jennings in Painesville, Ohio. Charles Jennings served in the Ohio House of Representatives and was known to be an outspoken abolitionist. The family's standing allowed Frances Jennings to receive formal schooling at Painesville Academy and Willoughby Female Seminary. In 1857, Frances Jennings married John S. Casement, a territorial representative. The couple had three sons: Charles J., John Frank, and Dan Dillon, two of whom died at young ages.

While accompanying her husband on trips West for his position, Frances Casement met and befriended prominent suffragists like Susan B. Anthony and Elizabeth Cady Stanton. These relationships, coupled with Casement's thorough education, made her a strong advocate for woman suffrage and education. In 1883, Casement founded the Equal Rights Association (ERA) of Painesville, Ohio. Although the organization was created with the intention of discussing women's rights and education, she chose this name, according to the journal she kept about the group, because the language was not "as obnoxious to some people as woman suffrage." The group often contained people who were against women's voting rights, but Casement hoped they would be convinced by reading material and group discussions. The group also took ideas from both the National Woman Suffrage Association (NWSA) and the American Woman Suffrage Association (AWSA), the two national organizations that differed in their methods and goals for women's enfranchisement. Casement wrote that the ERA's purpose was "to inform ourselves in all that pertains to the rights and duties of citizenship and upon the leading questions of the day. And that we combine our efforts for securing to women the rights and privileges to which as citizens in a free country we are entitled."

From its founding in November 1883 to May 1884, the ERA had tripled its membership and had branches in other cities in Ohio. Throughout this time, the group had weekly meetings at the homes of various members. At these meetings, they held readings about political matters or matters regarding women, and spirited discussions and debates usually followed. Frances Casement received advice and copies of the Woman's Journal, a women's rights periodical, from Lucy Stone. On April 26, 1884, thirteen members of the ERA went to a meeting of the Western Reserve Club, where a paper was read on the rights of women regarding education and labor. On May 24 of the same year, the ERA met in the Painesville City Hall rather than a member's home. Interaction with the Western Reserve Club and more visible meetings increased the ERA's membership and solidified their existence as a pro-suffrage group.

In addition to her work in the ERA, Frances Casement served as the president of the Ohio Woman Suffrage Association from 1884 to 1888. Casement attended the sixteenth annual convention of the AWSA in 1884, acting as a vice president representing Ohio. She also served as an Ohio delegate to NWSA conventions. The OWSA, like the ERA, did not align itself with any one of the national suffrage groups that were at odds during this time. The OWSA also encouraged African American women to participate, which is significant as these women were, as a whole, left out of the suffrage movement. During her time in both the OWSA and the ERA, Frances Casement was outspoken about the need for the reunification of the two national suffrage groups: the NWSA and the AWSA. Though Casement was not directly involved in the reunification in 1890, it is thought that her ideas and her friendship with Susan B. Anthony played a part in this process.

Frances Casement died August 24, 1928. She was buried in Evergreen Cemetery in Painesville, Ohio. 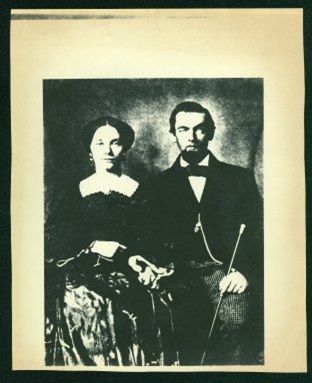