Jessie Valentine Budlong was born on August 26, 1875 in Providence, Rhode Island. She was the daughter of Granville Rhodes Budlong and Esther Duke Budlong, and had three siblings named Arthur, Frederick, and Clarence. Her father worked as an accountant before a long career as purchasing agent at a cotton manufacturer. On her father's side, Budlong was a descendant of Roger Williams, who founded the Rhode Island colony in the 1630s, and a soldier in the American Revolution. The family was included on the list of "elite families" in the Providence Society Blue Book and belonged to the First Baptist Church, a prominent church in Providence that had been founded by Roger Williams. In 1894, she graduated from Providence High School, where she served as class president of the Girls' Department. Budlong continued her education at Smith College and graduated with a B.A. degree in literature in 1898. She later earned an M.A. degree in romance languages from the Women's College at Brown University in 1908.

After graduating from college, Budlong returned to Providence and became active in social reform. She also taught Sunday School and served on an advisory committee at the Baptist Church. Her earliest and most prominent activism involved working girls' clubs. Middle and upper-class women founded the working girls' clubs movement at the end of the nineteenth century because they were concerned about the damaging effects of industrialization and urbanization on working-class American girls and women. They created clubs to provide working-class girls and women with social, moral, and educational opportunities. By 1902, Budlong was a vice president in the Massachusetts Association of Working Girls' Clubs, which also included Rhode Island clubs. She served on the board of directors of the Sprague House Association, a Providence working girls' club that had previously been called the Mount Pleasant Working Girls' Club. By 1904, she was the president of the Rhode Island Association of Working Girls' Clubs, which incorporated formally as the Rhode Island Association of Working Women's Clubs in 1907. She served as the organization's president until 1913. At a girls' club event, Budlong explained the importance of social reform and community service, stating, "We as a body of the present day can no longer live to ourselves but must be of value to the community." Budlong's long career of public service embodied this principle.

As president, Budlong worked to create better conditions in work, housing, and recreation for working-class women in Rhode Island. She worked to support a vacation cottage for working women and to lobby for protective legislation that would limit the number of hours for women or the kinds of jobs that women could work, such as night jobs. In a letter to the editor in The Providence Journal, Budlong praised states such as California and Illinois for passing legislation protecting women workers and bemoaned the fact that Rhode Island had not. She asked, "Does Rhode Island care less about the welfare of its women than other States?"

I dare not speak of Jessie B., she kept us far too clean;
She'd purge us from our wickedness with smiling air serene;
Then lead us forth, devoted lambs, to worship at her shrine;
This gentle soul of adamant, this Nemesis divine.

Despite her resignation, Budlong remained an active member of the organization, and served on its advisory committee into the 1920s. In the 1920s and 1930s, she was an officer in the City Girls' Club, a new women's club that was founded in Providence in 1920.

In addition to her work with the working girls' clubs, Budlong was active in the Consumers' League of Rhode Island and served as its recording secretary from 1915 to 1921. The Consumers' League was a reform organization devoted to the interests of working women and child labor that supported legislation and regulation to improve working conditions and encouraged consumers to buy goods from companies that were approved as safe and responsible businesses for workers.

Budlong became a leader in national reform for working women. From around 1916 to 1921, she served as treasurer of the National League of Working Women, an organization housed in New York City that had 15,000 members in 125 clubs throughout Northeastern states. Like the Rhode Island association, the National League of Working Women worked to improve conditions for working women through activities such as supporting legislation to protect working women, recreational outlets, and educational opportunities. The National League was especially active during World War I to protect women from the increased demands on industrial workers during wartime and engage them in patriotic activities to support the war.

Budlong took part in a variety of wartime activites in World War I. In 1915, before the United States joined the war, she was a founding member of a Rhode Island Women's Peace Party. After the American entry, she served as vice chairman of recruiting for the Rhode Island branch of the United States Student Nurse Reserve and as a member of a committee of women graduates from Smith, Wellesley, and Radcliffe Colleges to raise money for reconstruction work for towns and cities in France that had been damaged by the war. She gave a speech about "Why We Are at War" to members of the Rhode Island Association of Working Women's Clubs and participated in fundraising efforts by the Association to support war relief work.

As a college graduate, Budlong was a passionate supporter of women's education. She served as an officer of the Association of Collegiate Alumnae and the Smith College alumnae group in Rhode Island. She regularly gave speeches to Rhode Island high school girls and their teachers about the value of college education for women. Budlong also wrote a three-page pamphlet on Mary Lyon, a pioneer in higher education for women and the founder of Mount Holyoke College.

Budlong's college education also influenced her involvement in the woman suffrage movement as a member of the College Equal Suffrage League in Rhode Island. The League was affiliated with the Rhode Island Woman Suffrage Association and the National American Woman Suffrage Association and worked to get women college students and alumnae involved in the suffrage movement. The earliest documented evidence of her involvement in woman suffrage was in 1911. That year she attended a speech by Emmeline Pankhurst, the famous British suffragette who was visiting Rhode Island and gave a talk at the Providence Opera House. The speech was sponsored by the Rhode Island Woman Suffrage Association and the College Equal Suffrage. Following the event, Budlong and around forty local suffragists socialized with Pankhurst at a reception hosted by Sara Algeo. In addition to Algeo, Budlong worked with many other high-profile Rhode Island suffragists in her extensive community service, including Mrs. Carl Barus, Helen Emerson, Florence Garvin, and Mrs. Gerald A. Cooper.

Following the ratification of the woman suffrage amendment in 1920, Budlong became very active in the League of Women Voters. The National American Woman Suffrage Association had transitioned into the new organization in order to promote and influence citizenship and voting by American women. The League of Women Voters was a non-partisan organization, but Budlong became a supporter of the Republican Party and joined the Women's Republican Club in Rhode Island in the 1920s. In 1920, Budlong chaired the education committee for the United League of Women Voters (ULWV) in Rhode Island. In this role, Budlong promoted civic education for Rhode Island women. In 1921, she participated in a series of free citizenship courses offered by the ULWV that were provided for women in a lounge at the Outlet Company, a department store. Budlong taught courses on "Why Home-Makers be Interested in City, State and National Government?" and "The Origin and Nature of Political Parties." Throughout the first half of the 1920s, she served as chair of the ULWV citizenship committee and gave numerous speeches educating people about the Rhode Island State Constitution and reforms to it that the ULWV supported. The Providence Journal reported that at one of these events Budlong stated that "the basis of our political system is the right of the people to make and alter their constitutional Government."

In 1930, the Rhode Island League of Women Voters held a large event celebrating the tenth anniversary of the woman suffrage victory. Budlong served as secretary for the memorial fund committee responsible for the event. At the anniversary luncheon, she read biographical sketches of seven women from Rhode Island who were being honored on a national League of Women Voters' memorial for their contributions to the suffrage movement. Among others, the honorees included Elizabeth Buffum Chace, Pauline Wright Davis, Mrs. Barton A. Ballou, and Mrs. Carl Barus. Budlong's reading of the biographies was broadcast nationally on radio stations as League of Women Voters' branches throughout the country celebrated the anniversary.

In the mid- to late 1920s, Budlong was focused on tending to her sick mother and was less involved in community service. She never married or had children and was especially close to her mother. Following her mother's death in 1928, Budlong became severely depressed, suffering a "nervous breakdown" as The Providence Journal called it. In 1931, The Smith Alumnae Bulletin reported that she had been suffering from a long illness and had spent much of the year living with friends from Smith College; this illness is likely her depression. When her father died in 1909, his obituary noted that he also had suffered a nervous breakdown a couple of years before his death. On October 12, 1935, while visiting a close friend from Smith College in Brooklyn, Connecticut, Budlong committed suicide by hanging herself. Jessie V. Budlong is buried in Swan Point Cemetery in Providence, Rhode Island. 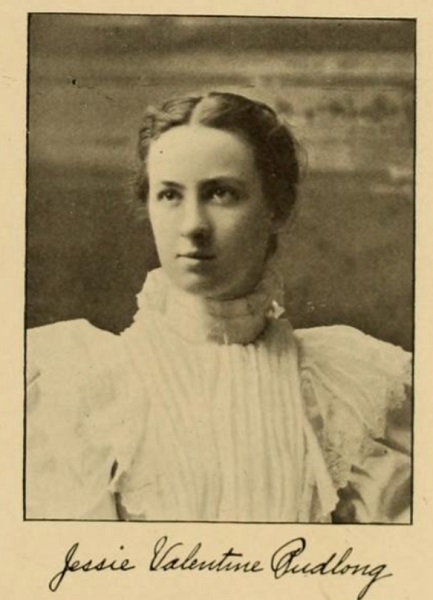 Acts and Resolves of the General Assembly of the State of Rhode Island and the Providence Plantations at the January Session, 1907 (Providence, RI: E.L. Freeman Company, State Printers, 1907), 418.

John W. Leonard, Woman's Who's Who of America: A Biographical Dictionary of Contemporary Women of the United States and Canada (New York: The American Commonwealth Company, 1914). [LINK]