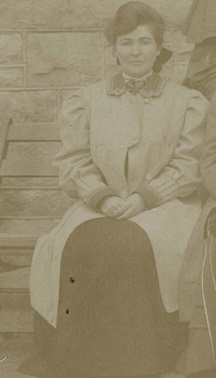 Helen Virginia Crawford was born on October 15, 1866 in Tallman, Linn, Oregon and was the youngest of 11 children. Her parents were Mary Ellen Crawford from Kentucky and George Fisher Crawford from Virginia. George Crawford was a farmer, so Helen Crawford grew up living on a farm in Benton County. In 1896, Helen Crawford was one of four other women who graduated from Willamette University's School of Expression. In that same year, Crawford became a professor of a newly added subject, Elocution and Women's Physical Culture, as well as History at Oregon Agricultural College (OAC), now known as Oregon State University. By 1900, she had moved to Corvallis, Oregon, living as a boarder and still teaching at OAC. Much of what Crawford did at OAC involved teaching young women how to speak properly, and also how to sing well, putting on concerts regularly at the college. In 1908, Helen Crawford left OAC to move to Lebanon, Oregon where she bought a fruit orchard. Crawford stayed and worked on her orchard until she died on March 30, 1937. Crawford never married, living as a single woman her entire life.

During her time in Corvallis as well as Lebanon, Crawford was involved in a multitude of women's groups where she held various leadership positions. As early as 1896, Helen Crawford was a part of the Oregon's Women's Congress. At that meeting, she and Ida Maxwell delivered a speech to the Congress, encouraging those attending to support women's suffrage. Later, when the two were Congress members, Maxwell and Crawford delivered another speech titled, "Women as County School Superintendents," in an attempt to sway the Congress to support Maxwell's campaign to become superintendent of Benton County schools. Much of Crawford's work in the Congress involved oration, which was fitting as a Professor of elocution. During her time in the Oregon Women's Congress, she read out a number of speeches written by other members of the Congress with "fine delivery [adding] much to the force of the argument.

Crawford was part of the Women's League of Lebanon in 1898 in a leadership position where she often read out speeches as she did in the Women's Congress. She was also President of Martha Avery's Cabin #18 in 1899, President of Women's Civic Improvement League in Lebanon, OR in 1913, and in 1914, Crawford was 8th vice president of the State Woman's Christian Temperance Union and Vice President of Oregon State Equal Suffrage Association for Benton County since 1905. Because of Crawford's extensive participation, she was mentioned by Elizabeth Cady Stanton as a "[woman] outside of Portland who put their [shoulder] to the wheel."

Crawford's fight for suffrage was apparent in her participation in women's groups. While at OAC, Crawford was given the rare opportunity to have the right to vote when it came to matters of the college, though she was not given any political control of college affairs. Crawford did though receive a raise in her salary at OAC to $1000, showing that she did make an impact on the college before she left in 1908.

In her later years, Crawford was well-known for the fruit orchard that she bought. Originally while at OAC, Crawford took a class on horticulture and became invested in the subject, because she "loved the 'good green earth and growing things.'" It was called Bonnie Doon Ranch, where she mainly grew walnuts, earning the title: "The Walnut Lady of the Santiam." Crawford's 30-acre orchard also included peaches, apples, and pears. Her orchard was successful for quite some time, allowing her to live off of the earnings from the orchard until she passed in 1933.

"'Here lies the land of equal opportunity for men and women, a place where people may dwell in peace and security, and enjoy heaven on earth'" - Helen Crawford, when asked about Oregon.

Gelser, Sara Anne Acres. Beyond The Ballot: The Woman's Christian Temperance Union and the Politics of Oregon Women, 1880-1900.1998.

Gordon, Ann D. The Selected Papers of Elizabeth Cady Stanton and Susan B. Anthony : Their Place Inside the Body-Politic, 1887 To 1895, Rutgers University Press, 2009.