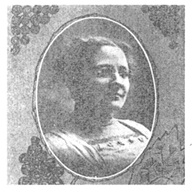 Lydia Bernhardina Johnson worked for woman suffrage and to secure broad equal rights in law for women in South Dakota. Johnson was born in Ludvika, Sweden on 6 March 1875 to Jacob E. and Caroline U. Carlsson. The family immigrated to West Superior, Wisconsin, where she attended elementary school and graduated high school in 1896. At the University of Minnesota Johnson earned a Bachelor of Literature in 1900, after which she taught for a time in Barnesville, Minnesota. She married Julius H. Johnson on 19 June 1901 in Milwaukee, Wisconsin. The couple moved to Iowa, where he earned a law degree from University of Iowa in 1901 and practiced law in Clinton. The couple moved to the Pierre area around 1904 and by then had their only child, a daughter Charlotte Amelia born in 1902. After reading law with her husband (and spending some part of a year in Vermillion at the University of South Dakota Law School) Johnson earned a law degree in 1912 and became the first woman member of the South Dakota Bar Association. Under her entry in the law school's 1913 Coyote Yearbook, is the quote, "A woman's worst enemy is her tongue." She and her husband practiced law together in Pierre and Fort Pierre. In 1945, she became the first woman state's attorney.

Johnson, who affiliated as Lutheran, joined and held leadership positions in numerous service organizations, including the Woman's Christian Temperance Union (W.C.T.U.) and the South Dakota Legislative Council of Women for which she served as president in 1920. She lectured across the state on many different social issues besides woman suffrage, such as child labor and the minimum wage. A charter membership in the Fort Pierre Woman's Club led her to the position of corresponding secretary for the South Dakota Federation of Women's Clubs from 1906 to 1908. From 1908 until 1910, Johnson served as the president of the state Federation. She worked on the legal standing of women and children, drafted a bill for the state legislature on property rights equity in inheritance laws in marriage, and advocated for vision and hearing tests for school children. Johnson chaired the Woman's Branch of Progressive Party of South Dakota and in 1912 and a national committee selected her as a Progressive Party campaign speaker. She toured Europe in 1921 and 1922 speaking on world peace and United States Constitutional issues and touring Sweden on behalf of the W.C.T.U. In 1920, she served as a speaker for the National Republican Committee.