Matilda Porter was born in Nashville in 1873 to Alex and Minnie B. Porter. Her father worked for the Tennessee Oil Company. Matilda lived in Nashville for over eight decades.

After the war, Porter continued her work as organization chairman for the state association. Throughout the months leading up to ratification, she worked incessantly as a member of the lobbying committee for the state association. She was part of a small group that met with legislators at the capitol in Nashville and traveled throughout the state advocating for ratification. With years of organizational and lobbying experience behind her, Porter contributed a great deal to the ultimate success of the Tennessee suffragists.

Matilda Porter never married, died in 1961, and is buried in Mt. Olivet Cemetery in the city she loved, Nashville. 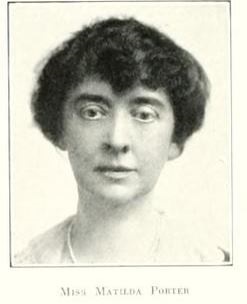