"To me feminism means that woman wants to develop her own womanhood. It means that she wants to push on to the finest, fullest, freest expression of herself....we have to overcome...custom and convention.... We have to compel conviction that woman is a human being."

Rose Young was one of the most energetic, multi-talented, and highly influential female activists of the second half of the 19th century in the United States; yet her name is not often mentioned among luminaries of the women's movement.

However, the massive publication, educational, and propaganda machine dedicated to advancing the cause of women suffrage which she helped design, launch, and direct for the Leslie Woman Suffrage Commission reached into every corner of the country during the late 19th and early 20th century, including the United States Congress. Her work, arguably, could be considered bedrock upon which every successful campaign for the cause of women's rights during that era was built.

The Leslie Woman Suffrage Commission was formed by National American Woman Suffrage Association (NAWSA) president Carrie Chapman Catt (1859-1947) in March 1917. It was funded by a large bequest in the will of publisher and author Miriam "Mrs. Frank" Leslie (1936-1914).

That same year, Young, a successful novelist, short story author, and experienced editor, was hired to create and run the Commission's outreach effort, the Leslie Bureau of Suffrage Education. Young had worked as editor for several organizations, including the University Publishing Company, and wrote articles under the banner of "Woman's Work and News" for New York's The Evening Post. She also served as chair for the Press Department of NY's 1915 Empire State Campaign Committee.

Young was keenly aware of the importance of general, broad-based public communication to the success of the fight for the vote and beyond. She opined, "If you concede that you want to keep suffrage before the public as a live issue, as the livest issue of the times, you must concede that you've got to keep it in the newspapers. To keep it in the newspapers you must relate it acceptably to the news of the day."

The Bureau propagated every kind of information, from editorials to statistics, news items both light and serious, cartoons, and even the plates for reprinting inserts and articles in newspapers across the country. In addition, she was editor-in-chief of The Woman Citizen, official newsletter for the women's movement under the NAWSA umbrella.

Her love for her home region, which was struggling after the Civil War, is evident in the successful novels and short stories she wrote with Missouri, the Midwest, or rural life as settings. Her works are crowded with characters, sometimes amusingly so, yet, landscapes were often the most eloquent characters of all.

Nevertheless, she had moved to New York City by 1903, and, in addition to her energetic work for the suffrage cause, continued to publish articles, editorials, and staggering numbers of short stories.

Young participated in rallies, meetings, and conventions, and gave speeches at some of them; yet, as is common with editors, rather than seeking an individual spotlight, her most important and lasting work was structural: molding integrity of purpose, then shepherding effective dissemination of information to as large and as diverse an audience as fell within the scope of her instruments.

As with so many female activists, Young never married, but she did have several deep friendships; Catt, for instance, treated her with great respect, referring to Young as "gentle souled" and even signed letters "lovingly" as a measure of that friendship.

But the relationship that seems to have provided Young's most enduring, intimate relationship, whether or not that relationship was ever physical, was with Marie Jenney Howe (1870–1934). Howe, a married Unitarian minister, founded the feminist literary and debating society, Heterodoxy, in 1912. The group was based in Greenwich Village, New York City; Young became a member. Howe and Young would not only become intimate friends, but playwright collaborators. Young gave one of the "Ten Minute Speeches" at the First Feminist Mass Meeting, People's Institute, Cooper Union, NY, on Feb 17, 1914, which Howe organized.

Their friendship deepened to such an extent that when Marie Howe died, friends reportedly comforted and consulted Rose, not Marie's husband, Ohio senator Frederic Clemson Howe (1867-1940), as to Howe's final wishes.

Rose Emmet Young edited a small book of anti-war writings, Why Wars Must Cease, published in 1935. A collection of essays by several prominent women, including Catt, Jane Addams (1860-1935), and Eleanor Roosevelt (1884-1962), it was an outreach effort of the National Committee on the Cause and Cure of War. Peace or anti-war movements attracted many suffrage activists, and this late editorial service by Young, on the eve of yet another catastrophic war, was a fitting task for her at the end of her life. For her, all of life was a movement towards the "finest, fullest, freest expression" of freedom, and the only war worth fighting.

The last years of her life, Rose young lived with a sister in Mt. Kisco, New York. She died there in 1941. 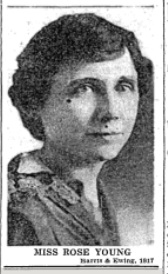 A reprint of one of the posters for this event, listing participants, can be found in Nancy F. Cott, The Grounding of Modern Feminism New Haven, Connecticut: Yale University Press, 1987. See also https://cooper.edu/events-and-exhibitions/exhibitions/we-dissent-design-womens-movement-new-york

The FictionMags Index (online) edited by William G. Contento and Phil Stephensen-Payne lists many of her works. http://www.philsp.com/homeville/FMI/s/s8948.htm#A231855

Correspondence with her editors at Century Magazine, and others: http://archives.nypl.org/mss/504#c1152907

A collection of photos of members of the Heterodoxy club:
https://www.pinterest.com/timscott733076/heterodoxy-club/

The National Archives has a picture of Rose, standing at the back, sideways to the camera, in a group. "Full caption reads: This delegation of officers of the National American Woman Suffrage Association received from President Wilson a memorial to the French women in which he advocates the federal woman suffrage amendment. The picture was made on steps leading to executive offices of the White House. Front row, left to right: Mrs. Wood Park, Dr. Anna Howard Shaw, Mrs. Carrie Chapman Catt, Mrs. Helen H. Gardner: second row, Miss Rose Young, Mrs. George Bass, and Miss Ruth White." https://catalog.archives.gov/id/533767

Ryan, Agnes E, and National American Woman Suffrage Association Collection. The torch bearer: a look forward and back at the Woman's journal, the organ of the woman's movement. Boston, Mass.: Woman's Journal and Suffrage News, 1916. https://www.loc.gov/item/88180024/.