Biographical Sketch of Augusta B. Parsonnet

Augusta Belle Parsonnet was born in Bialystok, Poland (then part of the Russian Empire) on September 24, 1870 to Thomas Levine and Katherin Brodsky. The Levines immigrated to the United States in 1886, during a period of anti-Jewish persecution in Russia, settling in Newark, New Jersey. Augusta worked in her father's grocery during the day and attended evening school to prepare herself for college. On February 5, 1893, she married Victor Parsonnet, a fellow Jewish immigrant, and the couple decided to study medicine together.

From 1895 to 1896, Augusta Parsonnet attended Tufts Medical School in Boston. In 1897 she entered the Women's Medical School of the New York Infirmary for Women and Children while her husband was attending Bellevue Medical School. When their finances deteriorated, Augusta quit school and worked for the Singer Sewing Machine Company so that her husband could complete his studies. Dr. Victor Parsonnet became a prominent gynecologist with an extensive practice. He played a key role in the founding and management of Beth Israel Hospital in Newark, where Augusta was president of the hospital's Ladies Guild. Augusta had three sons, Eugene, Thomas, and Marion, between 1900 and 1905. The Parsonetts were leading figures in Newark's Jewish community, where they were known as patrons of music and the arts.

In 1907 Augusta attended a lecture by Emmeline Pankhurst, the leader of the militant English Suffragette movement. The experience convinced her of the importance of the vote for women and she threw herself enthusiastically into the campaign for suffrage in New Jersey. She helped found the Newark-based Women's Political Union (WPU) of New Jersey to advocate for women's enfranchisement. Mrs. Parsonnet served as vice president of the WPU, before assuming the presidency for 1916-17. She campaigned for the unsuccessful 1915 New Jersey Suffrage Referendum and for New Jersey's ratification of the 19thAmmendement in 1920.

In 1920, Dr. Parsonnet died suddenly of a heart attack. Augusta remained active on the board of Beth Israel and she was energetic in raising funds for the hospital's expansion in 1928. She was a committed Zionist and supported many Jewish charitable organizations such as Hadassah and B'nai B'rith. She also continued to push for expanded educational opportunities and political participation for women. During the 1920s she served as a board member of the Girls Vocational School in Newark and she was a leading member of the Contemporary, a Newark woman's club that advocated for civic improvements.

In 1927 Augusta Parsonnet became the president of the Newark chapter of the League of Women Voters, a non-partisan organization founded by Carrie Chapman Catt to encourage women's political participation now that the vote had been won. Mrs. Parsonnet believed that women were better equipped than men to understand legislation related to children's welfare and community problems. She also wanted to encourage Jewish women to become more politically involved and independent. In 1926, while raising funds for the United Jewish Appeal, she criticized women for evading civic responsibility. Equal rights were not enough, she argued, unless women assumed equal leadership with men.

Augusta Parsonnet lived in the Weequahic section of Newark and later with her son Eugene and his family in Newark's Lincoln Park neighborhood, where she died on November 18, 1949, at the age of 79. 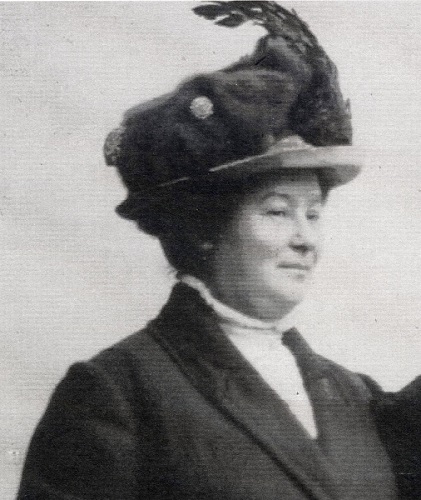