Note: Prof. Gleason is 2nd great grandniece of Mrs. Williams, whose many winters in Ithaca after 1909 greatly shaped the family including Aileen O'Connell Thompson, Gleason's grandmother, who lived at 104 Overlook Road with Mrs. Williams in those years. Her recollections of the stern disciplinarian, lively card player, and intellectual guide provided the prompts for the additional research undertaken here. The family uses the spelling Osborn predominantly, though you can see variation in the press during the 19th century for Ebenezer and Anna.

Anna Low Osborn was born in New York City on March 12, 1833 to Ebenezer Francis, {b. Danvers MA), and Rachel (Grant) Osborn, (b. Kennebunk Maine). Her father was educated at Andover and had served as a supercargo, traveling around the world before settling into the family mercantile business, Osborn and Young, in N.Y.C. Her parents, first cousins, married in Kennebunk, Maine on April 29, 1832. Raised in New York City, Louisiana, Missouri, and Sandusky, Ohio, Anna Osborn married Richard Williams on June 12, 1856. Her husband died in 1881 and she never remarried. She was a longtime resident of Buffalo, N.Y.

Anna Osborn's father saw to it that she was well-educated, and she became involved in civic causes while a teenager in Sandusky, Ohio. She nursed patients during the 1849 typhoid epidemic and assisted her father (Superintendent of the Mad River and Erie Railroad) in hiding escaped slaves enroute to Canada. After her mother died in childbirth in 1851, Osborn ran the household and raised her five siblings. In 1855, her father remarried and arranged for Anna to marry Richard Williams, a business associate. The couple moved to Buffalo, where Williams was proprietor of the Erie Mills. In 1857 her father died, and Richard became guardian of two of her siblings. During this time, she established herself in society as a member of the Unitarian Church, charter member of the Saturday Club (one of the oldest women's literary clubs in the city), Ladies Aid, and assisted in war efforts, including raising funds for freed slaves after emancipation.

In 1868, Richard Williams went bankrupt and spent long periods away pursuing business ventures. To make ends meet, Osborn Williams took over a day school in the basement of the Unitarian church, moving it in 1875 to their home at 254 Franklin Street in Buffalo. In 1881 her home became a meeting place for the Association for the Advancement of Women as they prepared for the 9th Annual Congress in Buffalo.

In 1887, Williams closed her school and moved to Brookline, Massachusetts as companion to her elderly cousin, Mrs. Elizabeth (Nathaniel Ingersoll) Bowditch, living among extended family in the Boston area. Many shared her Unitarian and intellectual interests, among them cousin Ellen Francis Mason, an early supporter of woman suffrage in Massachusetts. She returned to live in Buffalo after Mrs. Bowditch's death in 1892 but thereafter spent several months each year in Boston and Plymouth with Mrs. Lydia Hedge (Dr. Joshua R.) Lothrop, traveling together to Europe in 1893 and 1907. Julia Ward Howe was a neighbor.

Now retired from teaching, Mrs. Williams devoted her energies to suffrage. Her Franklin Street home, outfitted for a boarding school, now became "The Raleigh," with boarders and guest rooms for visitors. Its kitchen and classroom offered ample space for hosting group meetings. It was here in October 1897, that delegates from several Erie County political equality clubs met to form a county wide suffrage organization that represented the local suffrage clubs. Osborn Williams was made recording secretary of the Erie County organization. She also served as president of the Buffalo Political Equality Club for 10 years, hosting meetings at her Franklin Street home. In May 1900, Osborn Williams hosted Carrie Chapman Catt and Mary Garrett Hay while they were in Buffalo for the first in a series of educational conferences on women's suffrage being held in N.Y. state. In April 1904, Osborn Williams again hosted Carrie Chapman Catt and also Harriet May Mills, while the women were in the Buffalo area speaking for women's suffrage.

From October 13-14, 1908, the 40th Annual Convention of the New York State Woman Suffrage Association was held in Buffalo, with Osborn Williams serving as general chairman. The Buffalo Political Equality Club invited the National American Woman Suffrage Association to hold its annual convention in Buffalo that same week. The N.A.W.S.A. 1908 Annual Convention was held in Buffalo from October 15-21, with Osborn Williams serving as general chairman for the local committees. She was to preside over the evening sessions on the first day of the convention, which included welcome addresses from the mayor of Buffalo, J.N. Adam, and N.Y. Senator Henry W. Hill, and the president's annual address given by Anna Howard Shaw. On her arrival, Osborn Williams fell while descending from her motorcar and broke her left hip, preventing her from attending the convention she had worked so hard to realize. Leaders of the event paid their respects to her at the hospital, but it would be six months before she could return home to Franklin Street.

In the following years she continued to work in the leadership of the PEC. Whereas in the early years the club had only a half dozen members, by 1911 its membership outgrew her home and met at the Women's Union, then in their own offices on Delaware St. Mrs. Williams, by this time an honorary and much honored elder member of the Buffalo suffrage movement, remained a regular speaker at suffrage meetings. She spent winters with her sister and family in Ithaca, NY and summers with Mrs. Lothrop in Plymouth, continuing to lecture and travel to suffrage conventions.

In 1911, she moved to 157 Park St in Buffalo and sold the house at 254 Franklin Street, which continued as "The Raleigh" boarding house with a café and later a restaurant. It was a new era. In May 1919, Osborn Williams was among the 400 women who gathered to form the Erie County League of Women Voters. As honorary vice chairman, she gave a speech recalling Julia Ward Howe. Later that summer, 254 Franklin St was torn down to make way for The Famous Players Lasky Co motion picture film exchange. In her last known public speech, at the jubilee meeting in 1920 she remembered her work and friendship with Susan B. Anthony.

Anna Osborn Williams remained a patron of many clubs, active in the church, and hosted the Saturday Club at her home through her late '80s. In March 1924, she attended a gathering in honor Mrs. Dexter P. Rumsey, Sr. who then turned to honor Mrs. Williams. She died in 1926, age 93, having lived to see the passage of women's suffrage in New York, the passage of the 19th amendment, and to have commemorated those who did not. In 1931 she was listed on the Honor Roll of Suffragists in Albany. She is buried in Forest Lawn Cemetery, Buffalo alongside her husband, in the Sprague Family plot.

An unpublished memoir from the family archives of K. Gleason, by Aileen O'Connell, granddaughter of Ellen Augusta Osborn, the sister of Anna L. Osborn Williams, gave insight into Anna's upbringing, her years in Boston in various intellectual circles, and her time with family in Ithaca, N.Y. 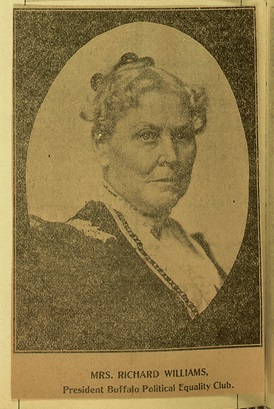 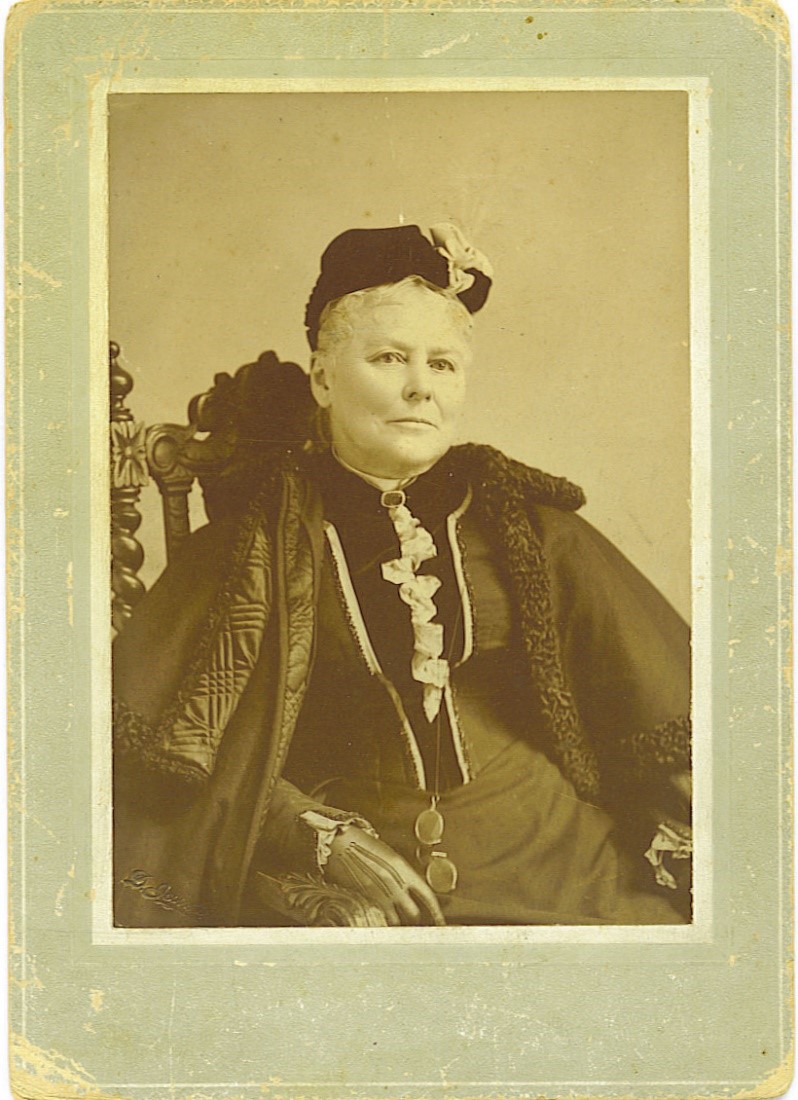 Courtesy of the family archives of K. Gleason, Ithaca NY 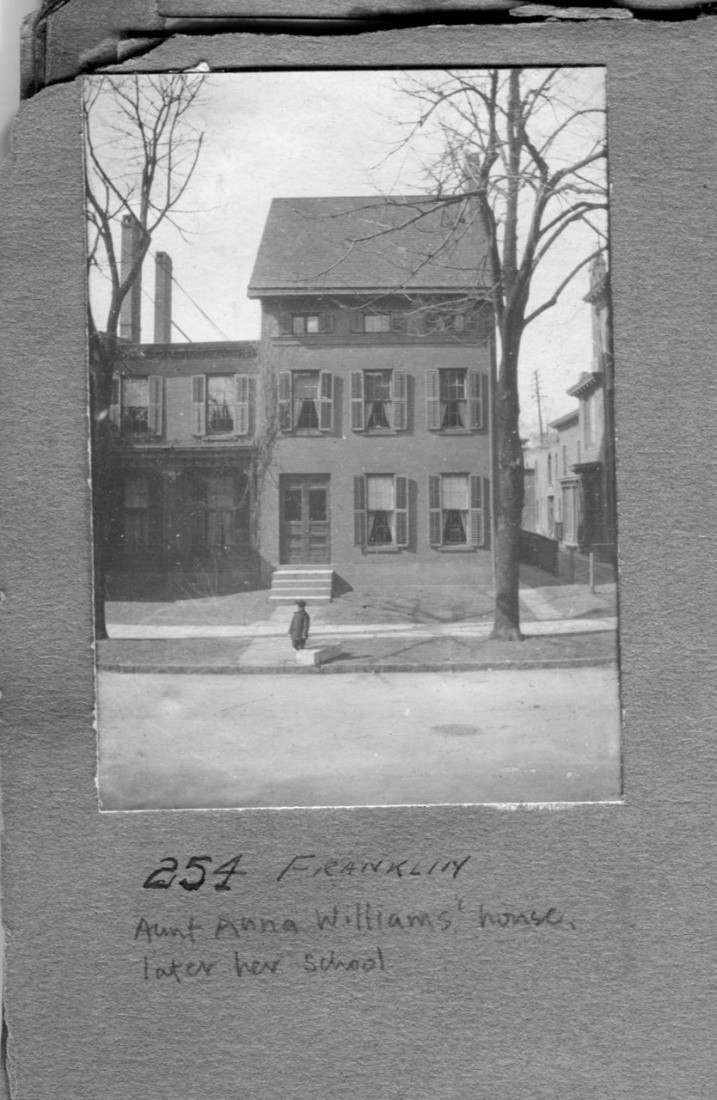 Courtesy of the family archives of K. Gleason, Ithaca NY
back to top
Previous Next