Gabrielle Stewart was born on October 24, 1872 in Cleveland, Ohio to Newell Coe Stewart and Gabrielle (Townsend) Stewart. She had three brothers, Major Samuel Stewart, William G. Stewart, and Newell Coe Stewart. Her father worked in the Cleveland public school system for over 30 years as a music teacher, director of music, and superintendent. She went to Cleveland public schools, and then attended the University of Ohio and Ohio State University Law School in 1900. She became a member of the Ohio Bar and practiced law in Ohio for 3 years. She was one of the first women admitted to the Ohio Bar. After moving to NYC, she was admitted to the New York Bar. Her law office was at 542 Fifth Avenue. On September 26, 1904 she married Walter Girdwood Mulliner from Leamington, Warwickshire, England. They had a small wedding, as it was reported that Walter was still recovering from an appendectomy. He was born May 13, 1864 to Henry and Ann Mulliner, and was an art dealer, with some sources stating he was a tapestries expert.

Gabrielle was noted as a leader in women's affairs and was referred to as a prominent suffragist. She was reported to have called anti-suffragists "traitors to the home" and "cowards." Gabrielle authored a pamphlet entitled, New York Laws of Interest to Women, read at the November 11, 1908 convention of the New York State Federation of Women's Clubs and published by the Federation in 1908. She was active in the Woman Suffrage Party from its inception in 1909. She served as chairman of the Legislative Committee of the New York State Federation of Women's Clubs, during which time she was successful in establishing a Women's Court, a separate court for the trial of women under arrest. She was a member of the New York County Lawyer's Association, Equal Franchise Society, Women's Republican Club, National Civic Association, National Society of Patriotic Women, and Daughters of the American Revolution. She pursued the hobbies of music and literature, and was a member of the Poetry Society of America, Browning Society, and Pen and Brush Club.

Gabrielle died Saturday June 28, 1919 in her apartment at Hotel Netherland in NYC. It was reported that she had been ill for two weeks. Her funeral was at the Fifth Avenue Presbyterian Church, NYC. She is buried in Sleepy Hollow Cemetery in Sleepy Hollow, NY. 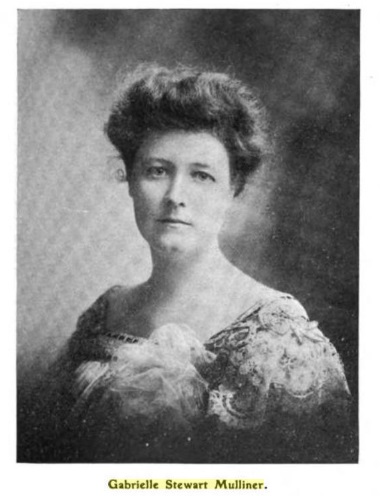