Lavinia R. Davis was born in 1862 in Orwell, New York to James, a farmer, and Amelia (nee Stowell) Davis. She graduated from Oberlin College, the oldest coeducational liberal arts college in the United States, in 1886. She established the Davis Loan Fund at the college in 1923. The fund provided loans to deserving young women. In 1896, she graduated from Syracuse University's College of Medicine as a physician. The following year, she established a general practice on Main St. in Oneida, New York, becoming the only female physician in the county. She practiced in Oneida for forty-seven years.

The acorn doesn't fall far from the tree: Both Lavinia Davis and her mother were members of the Woman's Christian Temperance Union (WCTU). Founded in 1874 in Cleveland, Ohio, the WCTU organized as a temperance reform movement. Under the leadership of Frances Willard, the second president of the WCTU, the organization officially embraced temperance and suffrage. A talented organizer, Frances Willard set up thirty-nine separate departments for various reforms; twenty five of the departments dealt with non-temperance issues, such as labor, prison, and welfare reform. The WCTU franchise department became one of the most active.

The watchwords of the WCTU: Agitate – Educate – Legislate fittingly characterize the activities of Dr. Davis.

Agitate. Starting in 1891, Lavinia Davis served as state superintendent of franchise for the New York WCTU. She addressed WCTU county and state conventions on suffrage and presented franchise reports. She was a charter member of the WCTU local union in Oneida, and in 1900 became president of the Oneida local suffrage club.

Dr. Davis expressed her reasons for supporting suffrage at state conventions. In 1905, she presented the motto for Oneida: "She who is called upon to people the world should be law-giver as well as life-giver." Her response to roll call in 1915: "Women prepare children for the world, give them the power to help prepare the world for children." She remarked on a "banner year" due to awakened enthusiasm for suffrage in 1911.

Legislate. Dr. Davis spoke before a New York Senate committee in 1903 and 1904 in support of a legislative measure extending to female taxpayers of third-class cities the right to vote on questions of taxation. At the 1908 state convention, she announced that the WCTU and the state Woman Suffrage Association cooperated in bills before the legislature and "a full suffrage measure was introduced but lost though a most enthusiastic hearing was held, women attending from all parts of the state." She participated on a legislative work committee for the National American Woman Suffrage Association (NAWSA).

Educate. From 1891-1918, Dr. Davis "sent out hundreds of suffrage leaflets and appeals to the local unions every year." She gave speeches at county conventions with topics such as the Status of Franchise and The Next Step-Franchise. She began to focus on civics education after New York granted women the right to vote in state elections in 1917. In a 1918 speech "Called to the Colors" she remarked that the ballot opened "new responsibilities and means for serving the country." She urged women to keep "in touch with the problems of the day through all kinds of organizations." She gave the chief address: "Civic Issues and the Coming Election" at a convention in 1921. Later, she became WCTU director of citizenship.

As a WCTU member, Dr. Davis also focused on temperance. In 1918, she noted that the ballot offered women "...the opportunity to express their opinions on the question of prohibition at the polls." She chaired the Resolutions Committee for the Madison County WCTU. It resolved to not support for political office "wet" candidates, who were against prohibition. She promoted the strengthening of the WCTU educational program so citizens would know the evil effects of alcohol upon the human body and upon the body politic. She opposed the legalized sale of alcohol after Amendment XXI repealed prohibition in 1933.

Besides her work for the WCTU, Dr. Davis engaged in other activities. She became a member of the Oneida Civics Club, and the League of Women Voters (LWV), which organized nationally in 1920 to educate woman voters. She represented the Oneida Women's Club at the LWV national convention in Washington, D.C. in 1925. A founding member of the Oneida Zonta Club in 1924, she became vice president for the new organization. The club believed in empowering women through service and advocacy.

Dr. Davis also focused on health issues. Appointed a member of the Board of Managers, Binghamton State Hospital by Governor Hughes, she held the position from 1908-1913. For the State Charities Aid Association, she served as secretary for the Oneida committee for the prevention of tuberculosis. She participated in the Madison County Medical Society as a member and later as treasurer.

In 1931, a Suffrage Memorial Tablet was placed in the State Capitol Building, Albany, NY by the NY League of Women Voters. It honored eighty-four NY women who had labored to gain woman suffrage. The list of names included Lavinia R. Davis. The tablet is located in a prominent place in the State Capitol.

Dr. Davis became seriously ill in 1943. She died in 1945 and was interred in Evergreen Cemetery, Orwell, New York. 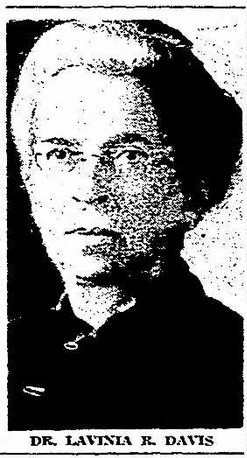