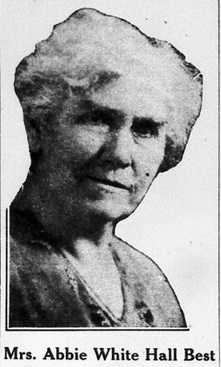 The family settled in Casselton, N.D. in 1879, and her husband worked in real estate loans, and book keeping before moving to Fargo. She was soon active in her church, becoming the first president of the Ladies Aid for the Westminster Presbyterian Church around 1880.

The Woman's Christian Temperance Union (W.C.T.U.) chapter for Cass County was first organized in 1888 and she was the founding president, a position she held periodically until 1912.

Her husband died on May 3, 1898 in Fargo, North Dakota. She would later use her experience as a single mother to support her call for suffrage.

Ten years later, in 1908, Best was listed, along with Ida C. Young, in the incorporation announcement for the Fargo Florence Crittenton House. This home provided a safe place for unmarried mothers, deserted wives and their children, and taught skills like sewing. Some of the residents were "little mothers" as young as twelve. It was part of a series of homes across the country named after the daughter of New York philanthropist Charles Nelson Crittenton. Best would remain on the board of directors until at least 1911.

In 1912 she was elected as vice president to the state W.C.T.U. and presented an address titled "The Place of the W.C.T.U. in the Present Political Campaign", at the North Dakota convention at Devils Lake. A few months later she attended the National W.C.T.U. conference in Portland, Oregon. She reported that "much emphasis was placed upon the ballot for women as a direct means for the destruction of the liquor traffic. Oregon had invited the National that we might be a help and an inspiration at the time of this important campaign for suffrage." She issued a more direct call in a letter dated December, 25, 1912 where she wrote "we believe the ballot in the hands of woman will be a great means to this end (ending interstate shipment of liquor)" and called for W.C.T.U. members to "be busy informing ourselves upon this question, that we me better impress others of its great importance."

The 24th Annual North Dakota W.C.T.U. conference had a focus on suffrage and each department superintendent was charged with addressing how the vote would help their work. Best, who was also superintendent of Sabbath Observance, spoke on how suffrage could result in a stricter observance of the Sabbath though the passage of state Sunday laws.

In 1914, Best, with fellow W.C.T.U. member and fellow suffragette R.M. Pollock, gave an address on the street in front of Charles Footer's store where they "gave solid arguments upon the subject of 'equal suffrage' and were listened to with respectful attention. The facts presented, that showed the benefits already experienced where equal suffrage is not in vogue, and the reasons given why the system should be national wide and 'world wide,' were incontrovertible." The reporter went on to state that "Mrs. Best was left a widow several years ago and has had the responsibility of rearing and providing for the education of her children and having no one to represent her property and other interests at the "ballot box." That year, Best and other members were celebrated for twenty-five years of membership in the W.C.T.U.

Best died on January 24, 1932. A memorial message written by W.C.T.U. president Elizabeth Preston Anderson states that "for more than forty years she has been officially connected with the State's W.C.T.U. ...She has served as a state officer through critical periods of our work." At the time of her death she was the director of Bible in Public Schools.