Emma Gasche Van Der Lieth (also spelled Vanderlith, Vanderlieth, or Vanderleith) was born in 1864 in Nevada City, California. Her father was a hotel keeper in a California mining camp and then in Eureka, NV. She lived in California for most of her youth before moving to Nevada She was raised in Carson City. She attended Bishop Whittaker's school for girls in Reno, Nevada, where she probably learned strong political, religious, and social values that fueled her zest for women's rights and the right to vote. This must have formed her early thinking as a young woman and prompted her to serve disadvantaged students, and others that she found in destitute situations in need of aid to propel them to a better life.

She was prominent leader in her community as the Chairman of the Student Loan Fund in the Nevada Federation of Women's Clubs, which reflects her championing for the higher education of disadvantaged students, and many of these students must have been women because she was a strong supporter of the suffrage movement. Being born a woman of the middle class, with her brother being a lawyer, facilitated her movement in society because she lived with him, her father, and step-brother. Her father and brother were most likely conservative in some areas, but when it came to obtaining education and suffrage, they must have had liberal views. They most likely fueled Emma's zest to promote education and suffrage among woman, which was probably likely in most middle or middle-upper class households where the women were encouraged to seek education and suffrage. This comfortable lifestyle that Emma lived must have made her appreciative of the opportunity that education granted women in her own social circle and outside of it. Emma held the title of member of the Nevada Altar Guild, and she was Episcopalian. Dedication to her faith instilled in her a fervor to fight for women's civil liberties and rights because of the Judeo-Christian beliefs that promote justice for all people.

Her father died in 1887 and she is listed as single, living with her widowed mother in Carson City, Ormsby County, Nevada in the 1900 Census. No occupation was listed for her or her mother in the census, but an older brother lived in the household and worked as a lawyer, so at this time he must have supported the family. She may have begun her political activism in the Women's Citizen Club, which was endorsed by Sadie Hurst, who was a prominent leader in the Nevada women's suffrage movement and the Women's Citizen Club. She was probably drawn to women of her same social standing who were fighting for women like her and ordinary women to have suffrage. Many women were fighting since the 19th century to have the right to vote, but were unsuccessful. A woman like Emma Gasche Van Der Lieth joined the Women's Citizen Club because it promoted the idea that women would get the vote sooner with effort and integrity put forth by the women. Sadie D. Hurst was an influential political leader who was President of the Women's Citizen Club at the time Emma joined the Club.

In 1914, the year that Nevada gave women the right to vote, she attended the state suffrage convention in Reno. She is cited in the Nevada state report in History of Woman Suffrage, Vol. 6 as having served on the Ratification Committee that lobbied the state legislature in 1919 to pass the 19th Amendment. In this successful effort, she served with Sadie Hurst and Mrs. Carrie Chapman Catt, the President of the National American Woman Suffrage Association. These great women encouraged women like Emma Gasche Van Der Lieth to take up arms alongside their fellow sisters and join the fight for equality and equity that is still being fought today in the America and in many parts of the world. 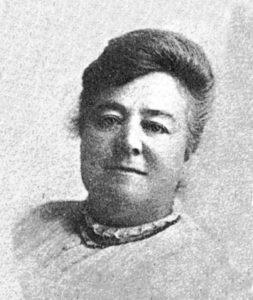