Caroline Bayard Alexander, later known as Caroline Bayard Stevens Alexander Wittpenn was born in Hoboken, New Jersey on November 21, 1859. She was third of seven children born to Edwin Augustus Stevens (1795-1868) and Martha Bayard Dod Stevens (1831-1899). Caroline was the granddaughter of Colonel John Stevens III, who purchased the land that would later comprise the city of Hoboken, NJ, earning the family the title of "First Family of Hoboken." Her father Edwin was an engineer, inventor, and entrepreneur who organized one of the first railroads in the United States. He amassed a large fortune which he left to his wife and children when he died in 1868. In his will he donated land and money to create an "institution of learning" which became known as the Stevens Institute of Technology. Martha, her mother, was very active in the community using her money to: establish the Stevens Institute, create many social-service organizations in Hoboken, and build the Church of the Holy Innocents which opened in 1874. Millicent Fenwick, the well- known Vogue editor and politician was Caroline's great niece.

At age 19, Caroline Bayard Stevens married Archibald Alexander, a philosophy teacher, in 1879. In 1880 their only child Archibald Stevens Alexander was born. The couple divorced in 1895, and Archibald disappeared from his ex-wife and son's lives forever. Twenty years later, in 1915, Caroline married longtime friend and fellow advocate Henry Otto Wittpenn (1871-1931), former mayor of Jersey City (from 1908-1913). Henry continued his public service by twice running for New Jersey Governor and also served at the overseer of the Port of New York. He was the director of the First National Bank of Jersey City.

Prior to her marriage, Caroline's mother instilled ideas of civil service into her, which would forever change her as a person. She and her mother were extremely generous, contributing financially to over one hundred social service organizations and institutions in New Jersey including the Industrial School for Manual Training and the Memorial Day Nursery, both located in Hoboken. During WWI, she held posts with the Red Cross and Liberty Bonds organizations. Caroline's love of service led her to become the: manager of the New Jersey State Institution for Feeble-Minded Girls and Women located in Vineland, manager of the New Jersey State Village for Epileptics, and president of the New Jersey State Board of Children's Guardians. Caroline was consulted by New Jersey Governor Woodrow Wilson to work on welfare problems and in 1910, she was appointed the U.S. representative to the International Congress of Family Education in Brussels, Belgium. She sat on the board of control of the New Jersey Department of Institutions and Agencies (from 1918-26 & 1929-32), which worked on reorganizing the state's charitable and correctional institutions. After he became president, Wilson named her to serve as New Jersey's first National Democratic Committeewoman.

Caroline and her brother Richard were penal reform activists who advocated for probation as an option in the criminal justice system. As a probation officer in New Jersey, Wittpenn witnessed prison life and conditions for inmates, and she pushed for change. She urged for separate facilities for women in prison. Wittpenn believe that those who committed crimes could be rehabilitated or saved, and she urged for better treatment toward first-time offenders. Wittpenn also aided in creating the position of the probation officer and the creation of the juvenile court system. Due to her experience, in 1929, President Hoover appointed her as the Commissioner of International Prison Commission. Caroline was also appointed to the commission for the creation of separate women's prisons and became its first president. Years later she went to Switzerland as the U.S. representative to the International Prison Commission appointed by President Hoover.

"Caroline Bayard Stevens Wittpenn was probably one of the best known suffragists in the state of New Jersey," states Joan N. Burstyn in Past and Promise: Lives of New Jersey Women. At the home of Mrs. Richard Stevens, her sister in law, a meeting was held in 1910 to form a New Jersey branch of the Equal Franchise League, which Mrs. Clarence Mackay had organized in New York. Caroline was elected vice president of the Equal Franchise League of New Jersey at that initial meeting. In March of 1911, she marched as part of the New Jersey Equal Franchise League section in the big suffrage parade down Fifth Avenue in New York City. Suffrage involvement was a family affair as her husband, two sisters in law (Mrs. Richard Stevens and Mrs. Robert Stevens), and her brother Richard also supported the cause. Her brother, Richard, was an active woman suffrage supporter holding many meetings in his home at Castle Point and also being a member of the New Jersey League for Woman Suffrage. In 1915, Wittpenn joined the Committee of One-Hundred for Woman Suffrage which was chaired by Mrs. Everett Colby. In an article in the Trenton Evening Times, she said, "I have been a suffragist for a number of years, but if I had been opposed to equal suffrage before the outbreak of the European war the unspeakable horror and waste that is going on world have convinced me that some new effective political force was needed to save civilization." In the same article when asked if she thought that women would win suffrage in New Jersey, she said, "Public opinion in New Jersey is rapidly becoming more enlightened. There is no a village and there is scarcely a household where suffrage is not stirring in some form or other."

Caroline Bayard Stevens Alexander Wittpenn worked diligently throughout her life to help improve the lives of those around her and in doing so gained the attention, respect, and love of people everywhere. At the time of her death on December 4, 1932, at the age of 73, the New York Times referred to her as the "Best-Loved Woman in New Jersey." A 1932 New Jersey Observer article declared, "Throughout her life, she devoted herself to social welfare work and was recognized as one of the foremost women in this work in the United States." Caroline Bayard Stevens Alexander Wittpenn was a major influencer in women's rights and improved the working and daily living conditions of women around the world. 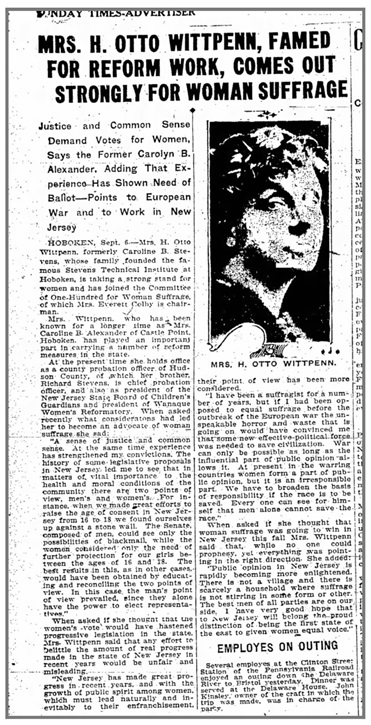