Born March 6, 1858 in Columbia, Pennsylvania, Lilian Welsh earned a medical degree at the Women's Medical College of Pennsylvania in 1889 and then traveled to Switzerland to continue her medical training. In 1894, Welsh was recruited to join the faculty of the Woman's College of Baltimore (Goucher College) in Maryland. For many years, the only female full professor at the college, she unified physical education, physiology, anatomy, and hygiene into a department whose courses were required of all students. Her students recalled that "in the days of the struggle for woman's suffrage, all subjects in her course in hygiene led inevitably to the discussion of votes for women."

In the Baltimore community, Welsh was a leader in the public health movement and an active member of civic, social, and suffrage clubs. At the base of the suffrage argument was the usefulness of women's votes. Writing a few years after the suffrage movement, in her book, Reminiscences, she remarked: "My teaching of hygiene as a community problem led straight to the ballot ... I saw the necessity of the ballot for women in obtaining the social legislation for which they were working ... A request to legislators would have much greater force when we could say 'Thousands of voters stand behind this,' instead of 'thousands of women desire such legislation.'"

As secretary of the Baltimore Association for the Promotion of the University Education of Women in 1897, she worked to persuade Johns Hopkins University to open its graduate school to women. That goal was realized in 1908.

After Welsh's retirement, Goucher President Guth wrote, "Much of the success of the graduate students whom Goucher College has stimulated is directly attributed to the concern and the sympathy which Dr. Welsh showed for graduate study." He continued:

It is hardly necessary for me to say a word concerning Dr. Welsh's interest in and influence upon the movement for the political emancipation of women, to give them an equality of opportunity in all phases of educational, business and professional affairs. Dr. Welsh with her immediate associates ... stood in the forefront of the movements ... for the furthering of women's rights. Her counsel was eagerly sought, her judgment was respected, and her word frequently became law—not in the sense of compulsion but of inevitableness. 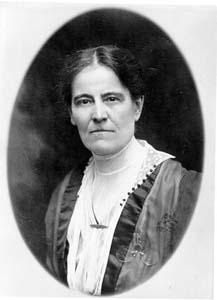