Suffragist, founder and first president of the Maryland Federation of Women's Clubs

Elizabeth King Ellicott was born in 1858 to a prominent family in Baltimore, Maryland. When she was very young, her mother died, and she grew up with her cousin and future founder of Bryn Mawr, M. Carey Thomas. Together they attended the Quaker Howland Institution in New York.

By her mid-thirties, King was among the founders of the companion Bryn Mawr School for Girls in Baltimore and was instrumental in opening the Medical School of The Johns Hopkins University to women students.

As a member of the Women's Literary Club, King joined a small faction that worked to expand the club's scope beyond the discussion of literary topics. King's circle was unable to amend the club's constitution, so in 1894, they organized the Arundell Club and elected King president. The Arundell Club affiliated with the General Federation of Women's Clubs. By 1896, membership had reached 300 and in the same year, King launched the Arundell Good Government Club. It was the first women's organization in Baltimore to discuss and act on civic problems.

In 1909, King helped organize and was the first president of the Maryland Federation of Women's Clubs, and she led the effort to broaden the potential impact of women's efforts to the entire state. By the federation's first meeting, membership consisted of nineteen clubs and 2,100 women. The following year, Elizabeth King married William Ellicott, heir to a flour milling fortune, but her marriage did not affect her activism.

Ellicott was deeply involved in the women's suffrage movement and helped to spread suffrage activism across the state, through the federation and the Equal Suffrage League, a Baltimore suffrage club. By 1910, because of unity issues, responsibility for organizing the state suffrage movement fell to Ellicott and Edith Houghton Hooker, founder of the Just Government League. Noting in 1914 the failure of most of the federation-sponsored legislative agenda, Ellicott begged members not to be discouraged. She declared, "We have gained insight and experience and at the next legislature we will be better equipped for pushing the interests of women."

Ellicott was plagued with frequent bouts of ill health, and she became ill and could not attend the federation's annual meeting in April 1914. She however sent a message to the gathering, expressing her belief in the power of the federation. She wrote, "I am convinced of the Vitality and far reaching influence of the federation and its usefulness in supplying to the lives of women and communities in which they dwell, a power for good and for progress."

Suffrage activity was documented in two publications by Diane E.

Weaver: "Maryland Women and the Transformation of Politics, 1890s-1930," Unpublished Dissertation, University of Maryland) and the

Nomination of Elizabeth King Ellicott to the Maryland Women's Hall of Fame . 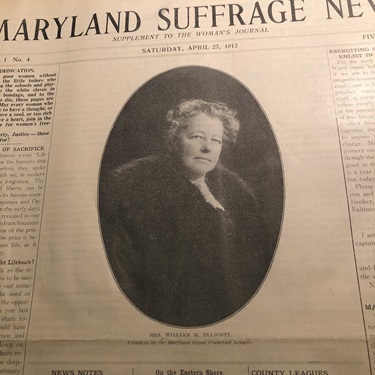