At the Women's College of Baltimore, Maryland (now Goucher College in Towson, Maryland), suffragist Mary Melvin impressed her classmates with her zeal. Mary was blind and was an honor student; her peers helped her by reading their textbooks aloud. She chose women's suffrage as her topic for a class assignment and was inspired to get involved. While a student, she began delivering open-air speeches and working for the vote in Baltimore, often with her sister, Anne Delia, at her side.

Anne Delia and Mary were born in Ellicott City, Maryland to James F. and Nannie Melvin. Their father was the editor of The Ellicott City Times; their mother was a writer and editor. (Click here for a bio sketch of their suffragist mother.) At about age six, Mary fell ill with typhoid fever; she regained her health but lost her sight. In 1897, she entered the Maryland School for the Blind. When she enrolled in the Women's College in 1908, the press marveled at her progress and likened her to her contemporary, Helen Keller (1880-1966).

Anne Delia entered the Women's College ahead of Mary and graduated in 1910. For a summer, Anne Delia worked with the Equal Suffrage League; in 1911 she became a field secretary for the Just Government League in Baltimore. In 1911, Anne Delia studied the life of Margaret Brent for a Fourth of July suffrage pageant and parade. From a booth at the 1911 Maryland State Fair, Mary and Anne Delia collected signatures on "a petition to be presented to the next Legislature calling for a suffrage amendment to the Constitution," The Baltimore Sun reported. Anne Delia also was involved in planning a suffrage march timed to coincide with the 1912 Democratic National Convention in Baltimore. She was chosen to don the shining armor of Joan of Arc; the striking costume had been used the month before at the New York suffrage march.

Mary Melvin served as a Maryland delegate to the 1912 convention of the National American Woman Suffrage Association (NAWSA) in Philadelphia. She graduated in June 1912. Accompanying her senior photo in Goucher's Donnybrook Fair yearbook is a cartoon of a girl at a ballot box, and a poem:

"Mary Melvin, suffragette,
Student, poet – never fret,
She will be a voter yet,
Faithful Mary Melvin."

After graduation, Mary was said to be writing a book or tract called "The Subjective Benefits of Woman Suffrage." She marched in the 1913 Women Suffrage Procession in Washington, D.C., organized by Alice Paul. Melvin was drawn into the Senate investigation of police security failures at the march, when a witness claimed that "the blind girl from Goucher" was jostled by the crowd and harassed by hecklers. With her mother's help, Mary submitted testimony to the Senate panel denying that she was endangered or abused.

Anne Delia left the League in 1912 to work in recreation centers, juvenile courts, and correctional programs for women in several states. The sisters moved to Sacramento, California, in 1929. Anne Delia died in Southern California in 1939 and was interred in Sacramento.

Mary earned a master's degree at the University of Pennsylvania. She taught at the Connecticut School for the Blind and schools in other states. In 1945, the Washington State Department of Social Security hired her to teach blind adults how to lead independent lives in Spokane and Walla Walla. She died in Walla Walla in 1951.

Many newspapers reported her suffrage activity and documented her achievements as a blind person, including The Eugene Daily Guard, The Baltimore Sun, The Washington Times,The Toledo News-Bee, and Spokane Chronicle. The cartoon and drawings are from her yearbook, Donnybrook Fair, 1913 edition/ Senior Class of 1912, ( College Library Special Collections and Archives). The Senate investigation and her testimony are documented in "Suffrage Parade Hearings Under Senate Resolution 499, Part One, March 6-17, 1913" from the Subcommittee of the Committee of the District of Columbia (United States Senate), "Hearings for a Subcommittee of the Committee of the District of Columbia" from the First Session under Senate Resolution 499, Suffrage Parade (United States Senate, Sixty-Third Congress), and "Proceedings of the National American Women's Suffrage Convention, 1912" (Library of Congress). Additional sources include the U.S. Census, Maryland Suffrage News, The Denton Journal, California Death Index 1905-1939, Maryland School for the Blind, and Goucher College Library Special Collections and Archives (admissions and alumnae records). 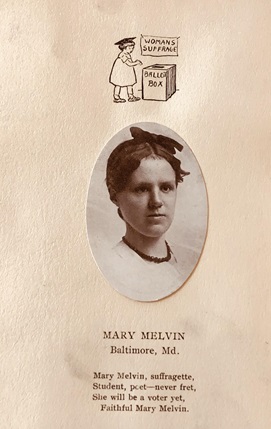