As a Just Government League (League) field secretary from 1910 through 1912, Nannie V. Melvin planted suffrage clubs in towns from Cambridge to Elkton on Maryland's agricultural Eastern Shore. She recruited rural suffragists when the Baltimore-based League needed statewide representation. She opened a League office in Denton in September 1911, and the next month founded the Just Government League of Caroline County. Though histories of Maryland suffrage groups tend to overlook the Eastern Shore, Melvin's efforts provide a glimpse of suffrage organizing in Cecil, Caroline, Dorchester, Wicomico, and other counties far from urban Baltimore.

Melvin knew the waterways and back roads and had political and media savvy. She was born in 1865 in Hillsborough, Caroline County (Maryland), to wealthy wheat farmer and two-term state senator, Thomas Frederick Garey (1821–1886), and his second wife, Annie G. Garey (1835-1901). Nannie achieved acclaim as a writer with poems and essays published in the magazine Puck, The Baltimore American, and her hometown paper, The Denton Journal. She married the Denton newspaper's owner, James Fisher Melvin, in 1883. They moved to Ellicott City, where he founded the Ellicott City Times; one source identifies her as the associate editor. They raised two sons, Thomas and James M., and two daughters, Anne Delia and Mary, who was blind. (For a joint biographical sketch of these two suffragist daughters, click here.) The Melvins split in 1905 when James moved to Western states to launch more newspapers. Nannie became a working single mother and moved to Baltimore.

In a first-person article in The Baltimore Sun in December 1910, Melvin describes a boat trip for suffrage work across the Chesapeake Bay in Cambridge, and up the Choptank River to Denton. Along the way, she polled fellow passengers about their views and took notes. Town by town, she collected names of suffrage sympathizers and antis, and delivered speeches. When she established the League office in Denton, she provided a waiting room where farm women could gather to talk.

At her invitation, Anna H. Shaw, president of the National American Woman Suffrage Association (NAWSA), spoke at Denton's courthouse in 1911. That year, Melvin led a delegation of Caroline County women to Baltimore to hear British suffragist Emmeline Pankhurst speak at the Lyric. On Election Day 1911, in a car festooned with signs, she rode 90 miles of Caroline County byways to give speeches and distribute leaflets at polling places.

In February 1912, Denton and Baltimore suffragists sent "a deluge" of telegrams to Annapolis calling on the Committee on Constitutional Amendments of the House "to report favorably on the Woman's Suffrage bill" proposed by the League. Melvin's telegram read: "Eastern Shore women are ready and desire the ballot." The proposed state constitutional amendment failed. Melvin's group then asked Caroline County voters to pledge they would vote only for candidates who supported women's suffrage during the next Maryland primary.

In late 1912, Melvin became a political organizer for the Women's [Woodrow] Wilson League. Then in 1913, she applied to run in a Maryland election for the position of the Deputy State Auditor. "The place, however, will go to a voter," reported The Baltimore Sun. Ever a trailblazer, she moved on to a career as a policewoman, probation officer, and reformer of corrections programs for women. She died in Sacramento, California, on May 14, 1942.

Documentation of her suffrage activity are found in numerous articles from The Baltimore Sun; and The (Washington, D.C.) Evening Star; Maryland Suffrage News; Maryland State Archives; California Deaths 1940-1947; U.S. Census records from 1900 to 1950; and The Denton Journal. 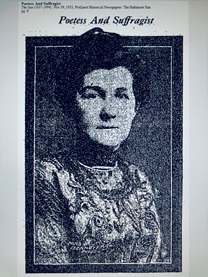