Nannie Herndon Rice was born on November 30, 1886, at her family home in Starkville, Mississippi, to Arthur Hopkins Rice and Frances Mary Smith Rice. Her father was a medical doctor who held degrees from the Medical College of Alabama (now known as the University of Alabama Medical College) and Columbia University in New York City. She lived most of her life in Starkville.

In 1905, Rice graduated from the Industrial Institute and College (II&C)—later known as the Mississippi State College for Women and now known as the Mississippi University for Women—in Columbus, Mississippi. Rice earned a Bachelor of Arts degree. The following fall, Rice began teaching at II&C. She spent the summer of 1906 studying at the University of Chicago, but returned to teach at II&C at least until 1910, holding positions as assistant in mathematics and assistant in English. Rice also headed the English department at St. Mary's College in Dallas, Texas, which was a college for women. And she held graduate degrees from Columbia University (1911) and the University of Illinois (1932).

In 1914, Rice joined other alumni of II&C in protesting the dismissal of several faculty members without explanation. The controversy stemmed from a letter sent to legislators making accusations about the college and its administrators. After several months of not being able to identify who was behind the letter, four faculty members' contracts were not renewed, implying they were associated with the letter. The alumni felt the action, which was taken suddenly and without explanation, tarnished the names of the dismissed faculty. Subsequently, alumni chapters and members across the state began writing letters in support of the dismissed teachers. The women were eventually reinstated.

The year 1916 also marked Rice's first involvement in the suffrage movement. At the annual Mississippi Woman Suffrage Association (MWSA) convention in Meridian, Pauline Orr—Rice's former teacher—was elected the MWSA president and Rice was elected recording secretary. At the same time, the MWSA passed a resolution expressing regret that the state legislature did not give women the right to serve as trustees on educational boards. At the 1917 convention in Starkville, Rice was elected corresponding secretary. She and Mary Gay "of the local league worked indefatigably for the success of the meeting." One of the resolutions passed was

"Whereas, Canada, Russia, and England have recognized the need of franchising the women of their countries as a logical outcome of their valuable contributions to the world war. Therefore, we, the delegates of the Mississippi Equal Suffrage Association in convention assembled ask of the Congress of the United States the passage of the Federal Amendment as a war measure thus freeing the time, energy, and money of 2,000,000 women for national service."

In 1918, Rice continued her role as the MWSA corresponding secretary. At an MWSA executive meeting, reports were made of "splendid war work done by Suffragists all over the state." Rice transmitted correspondence on behalf of the MWSA president, including one article that allayed fears of Federal intervention in state elections after the ratification of the Federal Amendment by the required 36 states.

By the 1920s, Rice was working in the library at the Mississippi Agricultural and Mechanical College (now Mississippi State University (MSU)). While there, she became active in the Mississippi Association for the Preservation of Wild Life, whose purpose was to stimulate interest in conserving wild plant and animal life in the state. She also attained some notoriety in 1926 for her response to H. L. Mencken's comments about the backwardness of the state of Mississippi. Her response, titled "Mississippi," appeared in American Mercury. Among other things, she noted

"Mississippi was the last settled of the Southern States east of the great river... The first college established—it is claimed in the world—for the higher education of women was Elizabeth College in Mississippi. Mississippi was the first State to give married women a legal right to their property—a law taken from the customs of the Chickasaw Nation. It was a Mississippian who was chiefly instrumental in establishing equal suffrage in Wyoming in the [eighteen] sixties...Next to Virginia she had seen more of the conflicts of the Civil War than any other Southern State. It has therefore taken her longer than the other States to repair her loss, to regain her stride of pioneer days, and to pioneer new fields."

Beginning with the 1930s, Rice's career as a librarian at MSU flourished. She gave speeches at state meetings of the Mississippi Library Association on certification and collecting state materials, and presented annual reports on the library's acquisitions. In 1947, Rice travelled with others to Tennessee to visit other university libraries that might be models for a new one planned at MSU. She commented

"Although our library may be built on a smaller scale, the plan of the Vanderbilt Library has many features that can be used in planning our library. The positions of the reserve book room, the reference room, the large work room where all acquisitions and processing activities are done, and special reading rooms, all with direct access to the book stacks, are especially good."

At MSU's homecoming in November 1955, Dr. Emma Laney—a fellow suffragist—presented the university with a portrait of Pauline Orr to be hung in the Orr building on campus. Rice headed the committee of Orr's former pupils who commissioned the painting. Rice retired on July 1, 1957 after 42 years of service to the MSU library.

Rice died on March 6, 1963, three years after suffering a stroke; she is buried in the Odd Fellows Cemetery in Starkville, Mississippi. After her death, her personal papers were donated to MSU and are known as the Nannie Herndon Rice Papers. This 28-linear-foot collection of material includes nearly complete documentation on Meadow Woods Plantation—the Rice family home—and the families who lived there—including the enslaved—from the 1820s until the 1990s (material from other family members has been added more recently). It also includes Rice's correspondence with Pauline Orr, Mary Herbert Gay, and Emma May Laney on woman's suffrage activities.

In 1966, Frederic F. Mellen, one of Rice's nephews, published Nannie Herndon Rice: A Memorial Anthology 1886-1966. The booklet's contents were described as "consisting chiefly of verse and prose and containing a few book reviews." Some of the included works had been published previously in various journals and magazines.

The portrait of Rice that is shown below appeared in the Clarion-Ledger on November 26, 1967. It is an oil portrait by Karl Wolfe of Jackson, Mississippi, and was hung in MSU's Mitchell Memorial Library. 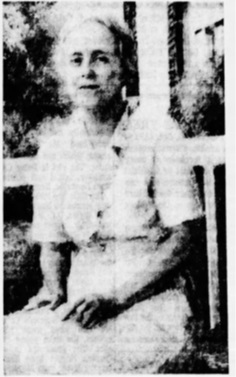