Mary Powell was born on February 1860 in Montgomery, Alabama, to James Robert Powell and Mary Jane Smyth Powell. Her mother was a school teacher and her father was a planter, politician, and mail contract and stage route manager. After his daughter's birth, James Powell gained fame as both a Colonel in the Confederacy and as one of the founders of Birmingham, Alabama, before his death in 1883. Meanwhile, Mary Smyth Powell left Montgomery to educate her daughter in Europe. They lived in England, France, Switzerland, Germany, and Italy between 1866 and 1880. After they returned, they lived in New York City and the District of Columbia.

On October 11, 1887, Mary Powell married James Burnet Crane in the Church of St. Mary the Virgin on West 45th Street in New York City. The wedding announcement indicated that the couple would reside in Philadelphia, Pennsylvania, which was the groom's home town. Crane was described as "a tall, beautiful blonde...a young lady of great musical talent." The couple had two daughters, Katharine E. Crane and Mary Estelle Burnet Crane.

After her husband's death in 1893, Crane lived in Belzoni, Mississippi, where her father's family held land, and Washington, District of Columbia.

In Mississippi, Crane became involved in the fight for woman suffrage. In 1915, she was the second vice-president of the Mississippi Woman's Suffrage Association (MWSA). She encouraged every believer in woman suffrage to contribute to the cause with the slogan "First your name, then your dollar." At the MWSA's April 1916 annual convention in Meridian, Crane was re-elected to the position of second vice-president. Her daughter Estelle Crane was also a suffragist; she served as MWSA's treasurer in 1919 and as an alternate delegate from the National American Woman Suffrage Association to the Swiss Association of Woman Suffrage Congress at Geneva, Switzerland, in 1920.

The 1920 and 1930 census records show Crane living in Plainfield, New Jersey, where her daughters also lived. In 1929, Crane visited Montgomery to gather information for the book about her father that she published in 1930 entitled The Life of James R. Powell.

Crane died September 23, 1930, in New Jersey at the home of her daughter Katharine.

The photos below are from Crane's passport applications. 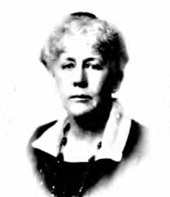