Marie Rosella Garesche was born in St. Louis on July 29, 1861 and was one of eight children. Her father, Ferdinand Louis Garesche, was born in New York but became one of the first settlers of St. Louis. He was a partner in a spice manufacturing firm and established himself through his business ventures, as well as his involvement in city politics. Her mother, Rosella Hicks Garesche, was also active in the community and established a home for aged women of color. Garesche, like her parents, served the communities she lived in through her art and local activism.

Garesche studied art at the St. Louis Fine Art School, the Art School at Washington University, and in Paris. While attending Washington University from 1882 to 1884, she edited Palette Scrapings, the school's art publication. Several of her pieces were published in text books and she received acclaim in art magazines. Following her studies, Garesche went on to establish the Artist's Guild of St. Louis and Artist's Equity. She also worked as a school teacher in St. Louis and taught for Soldan High School after it opened. In 1902, she received a great deal of publicity in the newspaper when her cousin filed a lawsuit against her over the ownership of a family heirloom, her grandfather's violin. The court determined that even though Garesche had the violin in her possession, her cousin owned it and it had been loaned, not given, to her.

Although she spent much of her life in St. Louis, Garesche often summered in Saugatuck, Michigan and also traveled to Europe. In 1899, she hired someone to take her out to view the lakeshore in Saugatuck. Garesche decided to purchase 100 feet of lakefront property there, which she planned to enjoy with her aging parents and other family. The cottage and area provided a place for Garesche to paint. The local historical society contains at least one of her paintings in their collection. She eventually built three more cottages on the property.

In 1910, Garesche and several other women founded the Equal Suffrage League of St. Louis and Garesche was elected vice-president. There had been a decrease in interest in the suffrage movement in Missouri and for four years, 1903-1907, there were no state conventions. The lack of interest was evident in St. Louis and few public rallies were held in the city during that period. Despite the barely visible movement and a strong anti-suffrage sentiment in the state, Garesche and a small group of women met at her house to discuss the suffrage movement and make plans to revitalize the movement. These eight women spread the word about the movement and at the following meeting about fifty women gathered. At this meeting, the group organized the League with the women present as the founding members. The organization did not use militant tactics to forward the suffrage movement and referred to themselves as suffragists. The League worked to secure suffrage for women and educate the community after the 19th Amendment was ratified.

Her activism allowed her to weave her passions together resulting in real benefits to herself and her community. At the age of 89, Marie Garesche passed away in a hospital in Tampa, Florida on Nov. 3, 1951. Her remains were sent to St. Louis for funeral services and interment at Calvary Cemetery. 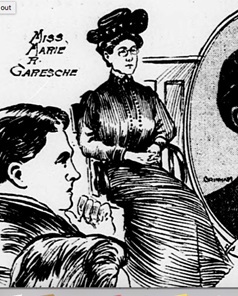