Amelia C. Fruchte was born on January 12, 1846, in Missouri to German parents, John A. and Susannah K. (Turnure) Fruchte. Amelia Fruchte grew up with three brothers, Thomas, Richard, and Alonzo. She graduated from the St. Louis Normal School, and she began teaching at sixteen. Over the course of Fruchte's nearly fifty-year tenure as a teacher of all grade levels and subjects, she became a prominent figure in St. Louis education. She never married nor had any children.

A colleague in the St. Louis schools, Chester B. Curtis, described Amelia Fruchte as a woman "who climbed early to a high level of attainment and continued on the plateau till death." Fruchte regularly attended the Concord School of Philosophy, where she collaborated with Dr. Denton Snider and explored her interests in psychology, science, literature, and art. In 1912, one St. Louis Post-Dispatch writer noted that "everyone who has attended the public schools in St. Louis within a quarter of a century must at some time have come in contact with her."

Amelia Fruchte campaigned for a variety of causes, including equal women's work rights and women's suffrage. Chester B. Curtis, remembered Fruchte as "an ardent worker"; "she entered into the social, sociological, educational and even political fields of St. Louis, in some of them as a pioneer." Fruchte was involved in numerous organizations including Society of Pedagogy, Teachers' Annuity Association, the Missouri Women's Suffrage Association, the Progressive Party, Wednesday Club, and the Teacher' Fellowship Society, all while still teaching by day.

Fruchte was an active member of the Missouri Woman's Suffrage Association during its early years. The association held rallies, collected petitions, issued reports, and sponsored public meetings. As early as the 1890s, she served as vice president for the state organization, and she continued to advocate for woman suffrage throughout her life.

In 1906, Amelia Fruchte was unanimously elected as the president of the St. Louis Society of Pedagogy, beating out two men and becoming the first women president of the organization. One of the men, Edmund Fowler Brown, was given the vice presidency, but he resigned given the woman-forward platform promised by Fruchte. His resignation speech, covered by the St. Louis Dispatch, detailed his thoughts: "I am opposed to the interests of man being championed by the society as I am those of woman and I think the society should have no other watchword than 'merit.'" Brown rejected Fruchte's presidency because she was a woman.

Nonetheless, Amelia Fruchte continued to immerse herself in politics, and she attended suffrage tea gatherings, where she gave speeches and held political conversations. She was known to be a dignified woman, who dressed elegantly, and was an excellent public speaker. One attendee of a tea gathering described Fruchte as speaking with "exquisitely shaded phraseology." Her influence, involvement in numerous groups, and talent at public speaking gave Fruchte recognition in the political sphere. She worked with the Progressive Party, and in 1912 she became the first St. Louis woman to be a delegate of a national party. Her talent in captivating audiences was shown when she spoke alongside Theodore Roosevelt at the Progressive State Convention in 1912. That same year, Fruchte went before the State Teacher's Association to speak and successfully secured their endorsement of woman suffrage. She also interviewed with Marguerite Martyn of the St. Louis Post-Dispatch, asserting how she viewed the importance of woman suffrage to educational improvements.

Amelia C. Fruchte continued her campaigns until her death on January 23, 1920, in St. Louis. She died from heart disease, just five weeks after suffering a collapse while still teaching at the age of seventy-four. She was survived by no immediate relatives and left most of her estate to her niece. She was buried at Bellefontaine Cemetery in St. Louis. 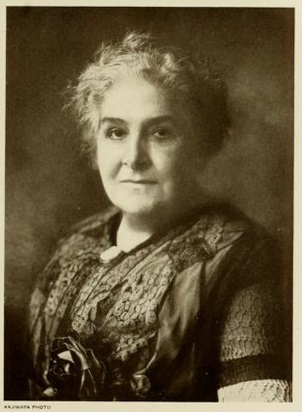 Martyn, Marguerite. "Suffrage Tea—Know What That Is? No, You Don't Drink It—You Hear It." St. Louis Post-Dispatch. May 26, 1912. Newspapers.com.