Marjorie Crabtree McGehee Ackley was born on September 1, 1871, in Trenton, Dade County, Georgia, to Judge George M. and Amanda Roberts Crabtree. George Crabtree, a tanner by trade, was known as "one of the most prominent men" of the community. She married Edward Francis McGehee, of Como, Panola County, Mississippi, on May 20, 1896, in Dade County and moved to Como, Mississippi.

McGehee was very active in the Mississippi Federation of Women's Clubs (MFWC). In 1915, she was elected President of the MFWC for 1916-1918. During her time as President, McGehee traveled over 4,000 miles promoting the group's activities, which were devoted to the welfare of the residents of the state and war relief, as well as women's issues.

In September 1916, McGehee traveled to the National Suffrage Association Convention in Atlantic City, New Jersey, and addressed the group as the Mississippi delegate on "Dixie Night." This event was planned to show "how the 'solid South' stands on the question of woman suffrage." Therefore, it was no surprise that the following April, McGehee was elected President of the Mississippi Woman Suffrage Association (MWSA) at its convention in Starkville, Mississippi. The Jackson Daily News called her election as President "a clever bit of strategy" and a "suffragist coup" that would make the suffragist cause a much "stronger fighting force" in the state. At that point, the MFWC had never supported women's suffrage as a group. However, McGehee led the group in adopting a resolution in support of women's suffrage at the club's Convention in November 1917.

At the same time, McGehee was busy as the Chairman of the Woman's Committee of the Mississippi Division of the Council of National Defense during World War I, refusing to even go on vacation for the first time in her life so that she could work on National Defense. She also used this position to help popularize woman suffrage. The Council supported the war effort through various activities from training nurses to organizing patriotic community programs. McGehee traveled the state promoting the work of the Council. She understood the importance of including African American women in the war effort and was praised by Alice Dunbar Nelson, African American organizer of the National Woman's Committee who said she was "delightfully alive, eager and interested" with a well-organized state program, even paying the black organizer's salary and expenses.

Somehow McGehee also found time to serve as the state agent of the Mississippi Anti-Tuberculosis Association. She traveled around the state educating Mississippians about tuberculosis and raising funds to help those afflicted, including over 600 Mississippi soldiers. All the while, speaking to members of the Legislature on woman's suffrage as well. The 19th Amendment was finally ratified in August 1920 by Tennessee, the last state to do so at the time, lead by Speaker of the Senate William Riley Crabtree, who was Marjorie McGehee's brother. It took Mississippi another 64 years before it officially ratified the Amendment.

Marjorie McGehee continued the work of various organizations throughout the state but it may have taken a toll on her marriage because she and Edward McGehee divorced January 1922. It seems as though she continued to represent the Tuberculosis Association all over the Southeast, including in Knoxville, Tennessee, and Savannah, Georgia. She married Bernard Ackley in Knoxville in February 1927, but filed for divorce less than six months later. The divorce was never finalized. Marjorie Crabtree McGehee Ackley died of pernicious anemia on September 11, 1927, in Knoxville, Tennessee, and is buried in Forest Hills Cemetery in Chattanooga, Tennessee.

The photo of McGehee below is from an MFWC publication. 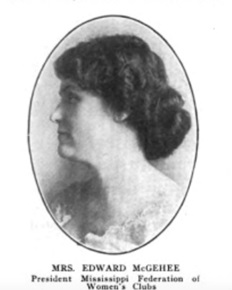 Special thanks to the Panola County Historical and Genealogical Society and the Mississippi Federation of Women's Clubs for their help in obtaining resources for this biography.