By Judy A. Carbone, President of AAUW-Garrett Branch

Catherine Sweet was born in Alliance, Ohio, circa 1850. She married young and had a child, but soon after was widowed. In an article in The Baltimore Sun from 1896, she states that it was in Probate Court that she learned how limited her rights were as a woman to secure her husband's property and her child's guardianship. This experience "made a woman suffragist out of me, and I have been devoted to the cause ever since," she said.

Little is known of Sweet other than what is in this article. She moved to Garrett County in western-most Maryland after her husband's death and re-married into the Sweet Family. Her second husband's first name is unknown, but he was the brother of William W. Sweet, who was a large property owner and the preparer of the Loch Lynn Heights Town Charter. The town was incorporated in April 1896. The incorporation documents state that "all persons over twenty-one years of age, and who have resided within said corporate limits for the period of six months preceding any election of officers for this corporation shall be entitled to vote at such election . . . ." Sweet encouraged her brother-in-law to add the words "male or female" after "persons," but he feared it would raise further objection to the incorporation of the town, so the words were not added.

The town was incorporated, and on election day, Sweet, the leader of the town's women suffragists, went to the polls with six others, many of them wives of prominent men in the town supportive of the more progressive opposition candidates. As they were "persons" residing in the town, they believed they had the right to vote. The judges turned the women away from the polls, and "Mrs. Sweet was denied the distinction of being the first woman in Maryland to cast a vote at a municipal election."

Sweet was furious. She was described as a well-spoken and intelligent woman, and she used her speaking abilities to let The Baltimore Sun reporter know of her ire. She is quoted as saying, "at the election last Monday, the judges decided that women are not persons, and so we could not vote. That decision will not do the town any good. I will not live in it. I will not let my husband live in it. I will not let him build the house he has been intending to build, and I am going to sell the two lots I own here." Sweet is not listed in the 1900 U.S. Census for Garrett County, and where she moved, if she moved, and where and when she died are unknown.

The first Loch Lynn Heights election in 1896 could have been a watershed moment in the fight for women's suffrage in the State of Maryland; however, the decision to deny the vote to Catherine Sweet and her associates was mostly about white men in the community being unwilling to share power and wanting to continue to promote their views on how the town should be run. Sweet knew that, and in a rural, conservative, small town in Western Maryland, it looks like she did the only thing left in her power to protest ... she spoke to the press and then decided to leave. 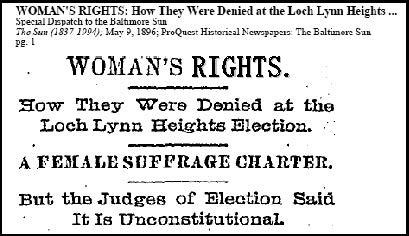