Celeste Jane Terrell was born on December 2, 1864, in Clinton County, Ohio, to Benjamin West and Asenath Johnson Terrell. Celeste Terrell married John Finch Barnhill in 1889, who would become a renowned surgeon in Indianapolis. Celeste Barnhill was frequently mentioned in the society pages of the Indianapolis Star.

Barnhill was an accomplished member of the Indiana suffrage movement. She served with the Indianapolis Equal Suffrage League, and in 1909, she helped direct the Women's School League. According to the History of Woman Suffrage, the Women's School League aimed both "to elect a woman to the school board" and to "improve the schools in Indianapolis." In 1911 the school league changed its name to the Woman's Franchise League of Indiana. Barnhill served as the treasurer. In 1912, she participated in the league's "auto tours," hanging a suffrage banner on the car, holding suffrage meetings, and distributing flyers at different cities around the state.

In 1917, the women of Indiana pressed the state legislature to pass a presidential and municipal suffrage bill similar to the one passed in Illinois. They formed a federation of women's organizations, called the Women's Franchise League Bureau. The bureau was based in the state house, and it was led by Celeste Barnhill and Alma Siehler. It helped coordinate suffrage and registration efforts for women in the state.

During the 1920s, the Barnhills began to winter in warmer climates, and they decided to move to Miami Beach, Florida, by 1930. They returned frequently to visit Indianapolis. Celeste Barnhill wrote a book about her Quaker lineage, called Joseph West and Jane Owen, published around 1930. Celeste Barnhill became a widow in 1943. She continued to live in Miami until her death on October 5, 1949, at the age of 84. She was buried in Crown Hill Cemetery in Indianapolis. 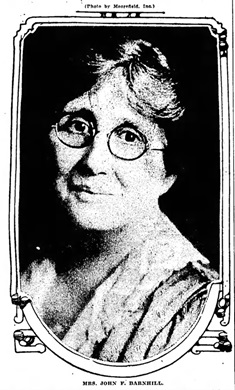