Della M. Smith was born May 21, 1853, in Lewanee, Michigan, to Horace Harding Smith and Louisa "Lois" Caroline Shephard Smith. She had 2 brothers and 1 sister. On December 29, 1875, she married Winfield Scott Johnson, in Hennepin County, Minnesota, and used her married name, Mrs. Winfield Scott Johnson, in written reports from then on. Three sons, George Winfield, Andrew Willard, and Roy Eugene, were born from 1876 to 1888 in Hennepin County, Minnesota.

By 1904, newspaper accounts show the Winfield Scott Johnson family receiving visitors at their home in Woodruff Place, a suburb of Indianapolis, Indiana.

The Indianapolis Equal Suffrage Society, organized in 1878 by Mrs. May Wright Sewell, was reactivated in 1909 by Dr. Amelia Keller, to form the Women's School League to elect a woman to the school board in Indianapolis. Mrs. Winfield Scott Johnson was one of her ten directors. Only two cities elected school boards, so to broaden their efforts to suffrage in general, the name was changed to the Woman's Franchise League (WFL) in 1911. The WFL organization added 34 branches in the first year, had 60 branches by 1916, and 112 branches in 1921, when it disbanded. The WFL was a branch of the National American Woman Suffrage Association (NAWSA); members attended NAWSA conventions, and corresponded with national leaders to determine suffrage strategies for Indiana.

After passing Congress in June, 1919, the 19th Amendment was sent to the states for ratification. The Indiana legislature had already adjourned for 1919 and would not have another regular session until 1921. Urged by women's organizations, Indiana Governor Goodrich promised to call a special session if two-thirds of the legislators would agree to consider ratification. The WFL sent out letters from the Governor to all the legislators and by January 13, 1920, had signed pledges from 35 Senators and 67 Representatives, the two-thirds majority needed. On January 16, 1920, the State of Indiana became the 26th state to ratify the 19th Amendment. It was not until Sept, 1921, that Indiana women could actually vote in at the state level, however.

Mrs. Johnson was also active in the Indiana Federation of Women's Clubs. In 1911, she served on the legislative committee headed by Mrs. Elizabeth Earl, and was elected recording secretary of the Bloomington Club in 1915.

In 1914, Mrs. Winfield Scott Johnson was Superintendent of the Montgomery County Community House for Girls in Crawfordsville, Indiana. The House, supported by private donations and membership dues, provided a social center for women and girls. She was also appointed by the Indiana Governor to a 4-year term, April 1917-1921, as a Girls School Trustee at the State Correctional Institution in Bloomington, Indiana, at a salary of $300.

In October, 1920, Mrs. Johnson was one of four Democratic speakers in Russellville, Indiana.

Mrs. Winfield Scott Johnson went to Indiana University but possibly did not graduate, as she was listed ex-1916, when she attended an alumni meeting in Decatur County, Indianapolis, in 1922.

Della M.* Smith Johnson died on Sept 1, 1935, of stomach cancer at age 82, in Iowa Falls, Iowa. She is buried there in Union Cemetery by her husband, Winfield Scott Johnson, who died in 1940, and her sons, George and Roy.

*None of the Federal and State Census records, nor birth, marriage, or gravesite records, show a name for Della's middle initial M. 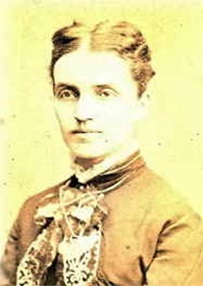