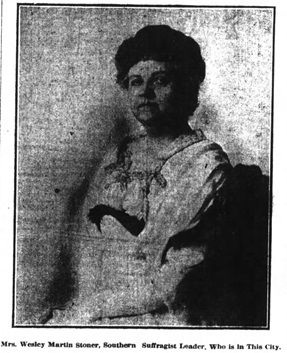 Portrait of Edith May Owen Stoner, from the Charlotte Observer, March 22, 1914, p. 3, in Newspapers.com.

Edith May Owen was born July 24, 1861 in Sandusky, Ohio to parents Celemene Douglas of New London, Ontario, and Austin Davis Owen of Sandusky, Ohio. She had one younger brother, Sherman Jay Owen. She became a music teacher and married Wesley Martin Stoner, a cashier for the Pullman Company, and had three sons: Jay Preston Stoner, a pastor; Douglas Gilmore Stoner, a jewelry salesman; and Wesley Martin Stoner, Jr. The couple and their children lived in Philadelphia and moved multiple times before settling in Jacksonville, Florida. While in Jacksonville, she was one of the organizers of the Woman's Club and served as its president. She was also Secretary of the Ladies' Music Club and Vice President of the Friday Musicale. By 1913, she was a member of the National American Woman Suffrage Association (NAWSA). She took up residence in Washington, D.C. by 1910, but continued serving as a representative of Florida within the suffrage movement. Her earliest involvement appears to have been in January of 1913, hosting a suffrage meeting with Elizabeth Thacher Kent as part of a series held in the drawing room of her Washington, D.C. home. At a meeting the following month, she helped organize placement in the Woman Suffrage Procession of March 3, 1913. She also participated as a Florida delegate in multiple marches to the Capitol to petition Congress for suffrage. By 1914, she was elected Press Chairman of the Congressional Union for Woman Suffrage. From 1914 to 1916, she traveled primarily through the south as a highly in-demand speaker on the topic of suffrage. She was described as "one of the recognized leaders in battle for the ballot" by the Pensacola News Journal and "one of the best speakers in the woman's suffrage organization" by the Macon Daily Telegraph. She rejected the label of "feminist" and preferred to call it a "woman movement." Quoted in the April 3, 1914 issue of the Tampa Times, she stated, "So many people speak of the woman suffragists as demanding the right to vote. I do not assume that attitude at all. We women feel that it is our right to vote and the argument is all on our side, but we are not demanding, we are simply asking the men to be just enough to give us what is clearly our right."

Stoner was involved in many southern organizations, including the Southern Society of Washington, the Southern Confederate Memorial Association, and the United Daughters of the Confederacy, despite being the daughter of a Union veteran. As such, Stoner was a guest speaker on the topic of suffrage primarily in the southern states, speaking at churches, lumber camps, teacher's associations, factories, and court houses. In many cities, including St. Augustine and Pensacola, she was the first to deliver public speeches on woman suffrage, and she helped establish more than 25 local organizations in Florida and West Virginia. She served in multiple organizations, at some points visiting as a representative of NAWSA, and in some in the capacity of Chairman at Large of the Southern States Woman Suffrage Conference (SSWSC). For the latter, she often spoke alongside its leader, Kate Gordon. By the end of 1914, the Southern Suffrage League of Washington, an affiliate of the Congressional Union for Woman Suffrage, detached from the Union over what it described as the Union's "antics," forming the new Kate Gordon Branch of the SSWSC and electing Stoner its first president. The SSWSC advocated for a state amendment that would enfranchise only white women. In speeches, Stoner stated that it did not matter if suffrage was accomplished by either state or federal amendments, but believed a federal amendment would not pass. When Tennessee ratified the 19th amendment as the last state needed to pass, she held a celebration rally at her home. Following the adoption of the amendment, she had a place on the platform at the woman suffrage victory meeting held by the National League of Woman Voters, the successor to NAWSA.

In 1914, Stoner attended the conference of the National Federation of Woman's Clubs in Chicago, which she reported on in a guest column for the Pensacola News Journal. She was the principal speaker at a Chattanooga parade for National Suffrage Day on May 2, 1914. She served in many leadership roles in the Washington Woman Suffrage Council, the D.C. State Chapter of NAWSA, the Suffrage Federation of the District of Columbia, and the College Equal Suffrage League. She attended several conventions, including the 1914 NAWSA convention in Nashville, the 1915 SSWSC convention in New Orleans (where she also was a speaker), and the 1916 SSWSC convention in Richmond. She helped plan the 1916 NAWSA convention in Atlantic City. She represented the SSWSC at an executive meeting with the Joint Resolutions Committee at the 1916 Democratic National Convention in St. Louis.

Stoner was also active in the Democratic Party. In 1916, she was elected Chairman of the Executive Board for the Women's Wilson Union advocating for President Wilson's re-election. Because of her work in the Women's Wilson Union, she was appointed, along with Mrs. James M. Boggs, as the first women to serve on an inaugural committee. She led a delegation of woman Wilson supporters in President Wilson's second inaugural parade. In 1919, she was considered a candidate for Civil Service Commissioner under President Wilson and had the backing of several senators but was ultimately not selected. In 1924, she served on the executive committee of the John W. Davis for President Club. 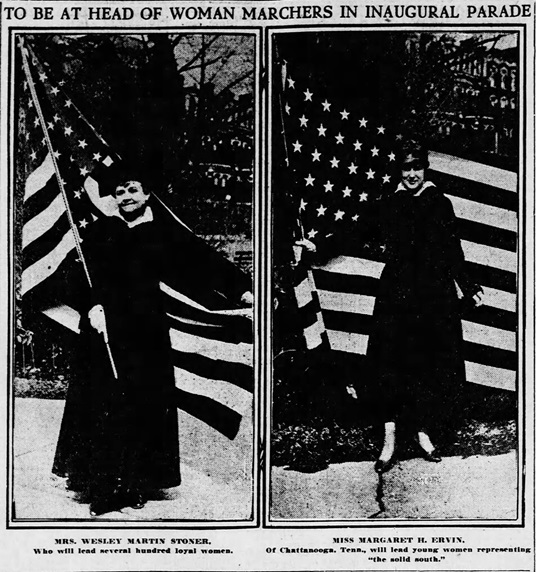 By the end of World War I, Stoner was heavily involved in war efforts. She became president of the D.C. Political Study Club in 1918, which started as a suffrage organization, but under her leadership, the organization turned to supporting war efforts. She served as the 1919 chairman of the D.C. Woman's Liberty Loan committee, which raised millions in bonds; as chairman, she received a medal for her work from President Wilson's daughter, Eleanor McAdoo, and organized a medal ceremony at which a medal was presented to Eleanor Roosevelt for her Liberty Loan efforts. In addition to her liberty bond work, she also worked with the Red Cross. 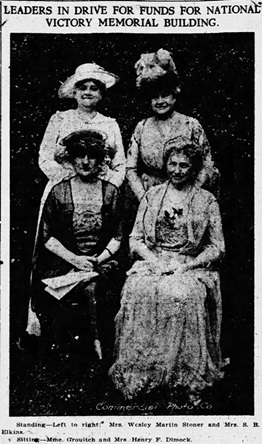 Portrait of Edith May Owen Stoner (top left) as a leader in the fund drive for the George Washington Victory Memorial Building, from the Evening Star, June 22, 1919, p. 1, in Newspapers.com.

Outside of suffrage and politics, she was an active fundraiser. She was a leader in raising funds for what would have been the George Washington Victory Memorial Building and participated in fundraising for the preservation of Monticello. She served as Chairman of the Near East Clothing committee, an organization that sent cold-weather clothing to what is now the country of Georgia. She also served as President of the Woman's Welfare Association, which created clinics across D.C. to provide low-cost medical services to white women and girls. To raise money for the organization, she hosted a festival at which Helen Keller was the principal guest.

Portrait of Edith May Owen Stoner as first vice president (prior to becoming president) of the Woman's Welfare Association, from the Sunday Star, March 30, 1924, p. 94, in Chronicling America.

She spent the last years of her life serving on the executive board of the Washington Tuberculosis Association. She died suddenly on February 22, 1931 in Washington, D.C.

Douglas, C. H. J. (1879). A collection of family records: With biographical sketches, and other memoranda of various families and individuals bearing the name Douglas, or allied to families of that name. Providence, RI: E. L. Freeman & Co.