Esther Griffin White was born in 1869 in Richmond, Indiana to a Quaker family, the daughter of Oliver White and Mary Caroline (Cottom). She attended classes at Earlham College but never graduated. She was a prolific writer who worked as a journalist for local newspapers, and created her own paper, The Little Paper, where she shared her own ideas and opinions.

Politically active during her lifetime, Esther began her journalism career as a theater and art critic, but eventually turned to writing about politics. In 1912 she provided vocal support for Theodore Rooseverlt's Progressive Party candidacy for President and her active support of woman suffrage appears to have begun at this time. She was a member of the Richmond Franchise League and the Woman's Franchise League of Indiana, a state affiliate of the National American Woman Suffrage Association (NAWSA), where she held several offices. One of the biggest accomplishments of White's "political" career was when she ran for delegate to the State Convention of the Republican Party in 1920 when women still did not have the right to vote. Esther found a loophole in the election laws and was elected as the only female delegate to the state convention. White also ran for Mayor of Richmond in 1921 (she did not win), and she ran for the U.S. Congress in 1926 and 1928, which she also did not win. In 1938, Esther ran for mayor of Richmond a second time but again did not win. After this, Esther became much less politically active as her health declined.

Esther was a strong supporter of the arts in her home city of Richmond. She collected art, published several volumes of poetry, and authored a book on Indiana Bookplates. She was also active in the Richmond branch of the NAACP. She died in 1954. 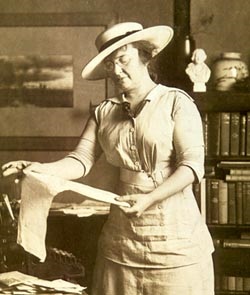 Hoosier State Chronicles: Indiana's Digital Historic Newspaper Program There are several articles about and by Esther Griffin White in the "Richmond Palladium."

Leonard, John William, Woman's Who's Who of America: A Biographical Dictionary of Contemporary Women of the United States and Canada, 1914-1915, Volume W-Z [LINK]