Miss Effie Graham was born around 1862 in Ohio to William and Sarah Graham. Effie attended common school and some higher education in Ohio. She completed advanced courses at Berkeley and Harvard. A lifelong educator, she was a teacher of mathematics at Topeka High School for more than 16 years. For six years, she served as the Secretary for the Kansas branch of the National Mathematical Association. In 1909, she served as President of that organization. She served as the only female editor of the Magazine of School Science and Mathematics. In the 1920 census, she owned her own home in Topeka, Kansas and was living with her sister Lola. Effie disappears from the record around 1922.

At the Kansas Equal Suffrage Association meeting in Representative Hall in Topeka, Kansas on May 16, 1911, Effie Graham was elected Chairman of Education. In an article in the Topeka State Journal Miss Graham said that education was essential to the campaign, saying "to understand suffrage is to believe in it." According to an article in the TopekaDaily Capital, as the chairman of education she revealed a three-fold plan that included the distribution of literature, the endorsement of suffrage by educational bodies, and essay contests in public schools. Miss Graham thought the essay contest would offer a chance to educate the parents as well. According to the Topeka State Journal, the contest consisted of prizes at the county level, congressional district level and the state level. Said Miss Graham "While it is desired that this may not be a campaign of spectacular argumentation, it is but common sense and justice for the opposition to expect sound reasons ready among the Kansas suffragists when demanded. Let us study both sides impartially and allow other the same privilege. This way fairness lies: wisdom, too, and safety, as we know Kansas people."

Miss Effie Graham was very involved with her community and served in several civic organizations. She was President of the Kansas Dinner Club in 1918, President of the Kansas Council of Women in 1919, and Chairman of the Scholarship Fund Committee of the Association of Collegiate Alumnae in 1920. She was also an accomplished author, publishing short stories in several magazines. In 1912, A.C. McClurg & Company published her first book, "The Passin'-On Party". In 1916, the same publisher released "Aunt Liza's 'Praisin' Gate." 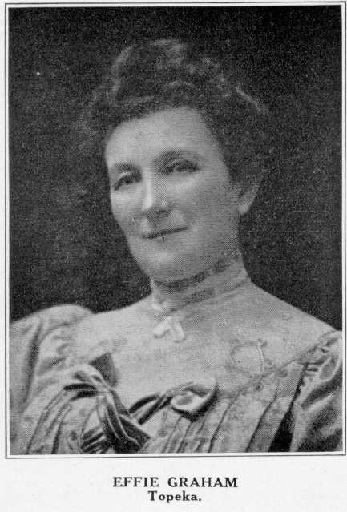