Susan Elizabeth Collier was born in Guilford, Indiana, on February 9, 1861, to Mary True and Ralph Collier. At age 21, Susan Collier attended Moore's Hill Normal School in Moore's Hill, and a year later, she taught school. In 1894, she graduated from the Curtis Physio-Medical College and became a licensed physician. She practiced medicine for twenty-five years in Indianapolis. Collier never married and did not have children.

As early as December 1900, Susan Collier worked with the Political Equality Society to help encourage woman suffrage throughout Indiana. In 1908, she served as secretary of a suffrage society formed in Indianapolis to promote the Indiana suffrage efforts beyond women's parlors. The society was prompted by a visit from Anna Howard Shaw of the National Woman's Suffrage Association and several other British and American suffrage organizers. Collier participated in a suffrage convention in Logansport on March 16-17, 1909. She was elected as first vice president. Collier was also elected as an officer to Judge J. A. Collins in the administration of a probation system at the police court on January 1910. In April 1910, Collier served as vice president of the Equal Suffrage Association of Indiana, and she was the secretary of the local association in Indianapolis. In 1912, she participated in the arrangements for a "funfest" in Indianapolis, a gathering to welcome suffrage visitors from New York. Collier helped run a booth to sell suffrage literature.

In the 1920s, Susan Collier retired from medicine. In 1926, the Indianapolis News noted that she was leaving for Houston, Texas. By 1940, she had returned to Indianapolis. On February 15, 1953, Dr. Susan E. Collier died of cerebral thrombosis at her niece's home in Indianapolis. The burial was on February 17, 1953, at West Fork Cemetery in Dearborn County, Indiana. 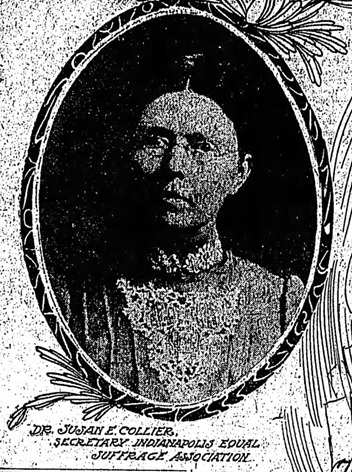