Anna L. Andrus was born in Canada in 1856 to parents of white, English decent. She later immigrated to the United States in 1880. She first lived in Detroit, Michigan and then sometime in the early 1910s, she moved to Miami, Florida. Anna Andrus was a prominent suffragist in both states. Mrs. Andrus was married before 1900. She had two daughters: Pansy, who, at the time of her mother's death was a well-known pianist in Miami, and Lucille Boone, who was living in Pennsylvania at that time. Mrs. Andrus was married, but in the 1920 Miami census, it was recorded that she was a widow and head of her household at age 64. She had a brother named W.J. Luke Whitly who lived in Canada. She owned her home on 225 Campys Mont City at this time. She was proficient in reading and writing.

Mrs. Andrus first got involved with suffrage in 1887 in Detroit. She joined a local league in 1887 as a charter member. She was drawn in to sign up at a Susan B. Anthony booth in the Palace of Education in San Francisco and was convinced after talking to a Miss Stevens. Mrs. Andrus knew and loved Susan B. Anthony which is likely why it caught her eye. She spoke about this booth at a meeting with Mrs. Florence Bayard Hilles of Delaware. Mrs. Andrus was selected as a Michigan Delegate of the National W.C.T.U. in 1897. In 1900, she was the President of her district branch of the Woman's Christian Temperance Union (W.C.T.U.) in Michigan. This was just the beginning of Mrs. Andrus's work for social causes. These accomplishments set the stage for her to become a well-known and very influential suffragist.

In 1911, Mrs. Andrus moved to Miami, Florida, where she got even more involved in suffrage work. At the Child Welfare convention of the Florida League, she was chosen as a delegate to go to the Buffalo Convention. This was an event where women's presence was up and coming, so Mrs. Andrus's involvement helped with the emergence of women's opinions on this issue. On November 4, 1913, she was elected as an auditor of the State Equal Suffrage Association through her membership in the Equal Franchise League in Miami. As an auditor she served on her state's advisory council and would be one of the leaders for the group in her state. In 1912, Mrs. Andrus was mentioned in a newspaper article for giving a lecture in Miami about temperance. This is an example of how she advocated both with groups she was involved in as well as individually. Also in 1912, Mrs. Andrus was chosen by the Temperance Union Elected Officers to be the recipient of a pin that was given to the suffragist who had done the most work and been the most successful. The vote was unanimous. This really proved how her work was valued. Mrs. Andrus was also made one of their officers, the chairman of superintendents. She also attended the first meeting of the Ladies Aid Society at her usual church, the First Methodist Church. Later, her work spread from Miami to all over Florida. In 1917, she was the second vice president of the Florida Equal Suffrage Association. She was also deemed to have been hospitable enough and a prominent enough suffragist to host and entertain delegates during Yellow Week, a week of suffrage conventions. Mrs. Andrus was also a member of the Miami Women's Club and attended the First Methodist Church in Miami regularly.

On February 7, 1931, Anna L. Andrus passed away. Mrs. Andrus's importance is highlighted by the press coverage of her death. The article was titled calling her a "Pioneer" and highlighted her work as a proof reader for the Miami Metropolis and an active social worker. The obituary stated she had moved to Miami 20 years prior, and described an impressive amount of work for suffrage and other causes, such as teaching night school to immigrants and assisting immigrants gain citizenship. Her funeral was also advertised as public, which further goes to show how much she was likely admired. Her membership in the following organizations was also highlighted: Alliance Tabernacle, Miami Women's Club, Active Member and Former President of the W.C.T.U., and organizer of the Miami Women's Voter League. She was described with the sentence "Social Worker Succumbs After Active Life of Helping". It seems clear just how influentially Mrs. Andrus impacted both suffrage and social work. 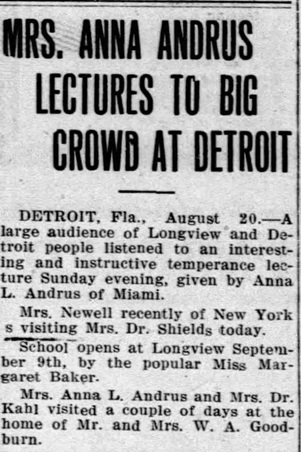