On June 26, 1919, as President of the Delaware Equal Suffrage Association, Eva Robin led a celebratory luncheon lauding Congressional passage of the Susan B. Anthony amendment. "We are here to celebrate a great victory," she declared. "Suffrage for women is now inevitable. Let our slogan be, 'A Vote for Every Women by 1920.'" Under her leadership, the group successfully lobbied Delaware's governor to call a special session of the General Assembly for spring, 1920, in order to consider ratifying the Nineteenth Amendment. Having guided the Delaware Association's strategy during the effort to get the amendment through Congress, she took on the task of organizing her co-workers for the ratification struggle before stepping down as president in November 1919 in favor of a more politically connected leader with state-wide visibility, Dover's Mabel Lloyd Ridgely. Despite Eva Robin's confidence and the efforts of state and national suffrage leaders, in June 1920, the legislature adjourned without ratifying.

Born Rivka Halpern in Russia on November 15, 1878, the young girl immigrated to the United States in 1883 with her parents, sisters, and brother-in-law. In Russia, the family had been middle class, enjoying the services of a cook and laundress, and supported by the father's salary from his counting-house position. But when her parents lost their savings through a bad investment, they made the decision to leave. With help from a German Jewish Charity Society, they settled in Pittsburgh, where her mother took in boarders to contribute to the family economy. Soon renamed Eva by a schoolmate, she learned English (the family spoke Yiddish at home) and managed to attend high school at a time when, as she once noted, her contemporaries were working in factories stripping tobacco or in stores serving as cash girls. In Pittsburgh, she met her future husband, Albert (Abe) Robin, also a Russian immigrant. With her encouragement, he completed his medical degree at the Western University of Pennsylvania (now the University of Pittsburgh) in 1898. Albert Robin moved to Delaware; he and Eva married in 1899 and soon made their home in Wilmington.

Albert Robin had a distinguished career as a physician, becoming the Delaware state pathologist (1899-1903), professor of bacteriology at Temple University (1900-07), medical director of a sanatorium for white tuberculosis patients (1910-1920), and a dogged campaigner in the "pure food and drug" movement of the day, as well as a passionate advocate for clean water supplies to combat typhoid and other diseases that spread quickly in crowded urban areas. Eva and Albert had five children: Nathaniel Robin (1900-1971); Gertrude Robin Kamin (1904-1975); Percival A. Robin (1907-1959); Paul Edward Robin (1912-1914); and Annette (Toni) Robin Snyder (1916-1974). Both Nathaniel and Percival followed their father's path, becoming physicians; both eventually practiced on Long Island, New York. Toni trained as an artist, served as an Army nurse in New Guinea during World War II, and then pursued a career as a fashion artist, editor, and advertising executive in New York City.

Eva Robin traced her awareness of gender inequality to the sad death of her younger brother, Yosela, in Russia. As the only boy in a family of girls, Yosela was destined to be her father's heir, who "'when God had summoned'" their father, would speak for him. "Presumably," she commented, "no female heir, according to Jewish tradition, was qualified." She remembered, too, having to claim her right to an education beyond primary school. Her father considered her "marriageable" when she reached sixteen, but her response—"a flood of tears"—caused him to abandon the idea.

In Wilmington, Eva Robin became one of the few Jewish members of the New Century Club, a hive of white women's civic activism that had been founded in 1889. There, she met suffragists such as Emalea Pusey Warner and Gertrude Fulton Nields, as well as the firm anti-suffragist Emily Bissell, with whom Albert Robin worked in anti-tuberculosis labor. She chose suffrage, joining the Wilmington Equal Suffrage Association in 1911. As the mother of young children, she participated energetically in the New Century Club's Child Welfare Committee, giving public talks on the topic of children's needs; in 1911 Wilmington's mayor appointed her as a delegate to a "Mothers' Congress" in Washington, D.C. In addition, she became a vocal member of the Juvenile Court Association, evidence of a commitment to criminal justice reform that she would retain throughout her life. The Club's Current Events Committee offered another forum through which she developed her public speaking skills, lecturing on topics related to Russian history and literature, and in 1917, on the Russian Revolution. She participated in fund-raising for the Hebrew Charity Association and United Hebrew Charities, but she and Albert lived apart from what she termed Wilmington's "Jewish district." She remembered "wend[ing] my way afoot" to that area to buy food items "for which we both yearned but could not get in our neighborhood grocery stores."

After joining the Wilmington Equal Suffrage Association, Eva Robin quickly became active in the work of the state association, an affiliate of the National American Woman Suffrage Association (NAWSA). Before the group's ties with Delaware's Congressional Union (CU) frayed, she attended CU meetings and the two groups worked together on an unsuccessful 1915 effort to amend the state constitution to enfranchise women. By 1916, however, she had firmly cast her lot with the Delaware Equal Suffrage Association and was hosting NAWSA visitors at her home. At the Delaware Association's annual meeting in November 1917, she became the group's first vice-president.

It would have been clear to Eva Robin upon her election that the Delaware Equal Suffrage Association was suffering from a leadership vacuum. With the United States involved in the Great War, many Delaware suffragists were devoting their time to war work through the Red Cross and Liberty Loan campaigns, and suffrage activity was in abeyance. NAWSA leaders Carrie Chapman Catt and Maud Wood Park visited Delaware in May, 1918, seeking to rouse the state's suffragists to be prepared if the U.S. Congress, as expected, passed the suffrage amendment and sent it to the states for ratification. Once Eva Robin took charge during that summer, and then agreed to assume the organization's presidency, there was a palpable quickening of the group's pace. With NAWSA's backing, her organization mounted a massive petition drive designed to pressure Delaware's two senators into voting to ratify the amendment. The 11,000 signatures made no difference; both men voted "no."

In a statement that Eva Robin appears to have authored, the women expressed "profound regret" at the senators' "attitude," and forthrightly asserted that they "desire no longer to be represented by proxy at the ballot box, but we wish to express, unfettered by any assumptions of masculine superiority, our own political convictions at the polls." The group then targeted for defeat in the 1918 Congressional elections both Delaware's anti-suffrage Senator Willard Saulsbury and its equally anti-suffrage at-large Representative Albert Polk. Both lost their seats. By early December, when Eva Robin issued a public plea for Delawareans to support the passage and ratification of the Nineteenth Amendment, the Delaware Equal Suffrage Association had left its doldrums behind.

When Congress sent the Nineteenth Amendment to the states for ratification, in June, 1919, prompting the Wilmington "victory luncheon," Eva Robin had already led the Delaware Equal Suffrage Association through a fund-raising campaign and an expansion of its membership. She oversaw the process of lobbying the governor to call the special session and organized legislative and ratification committees to interview legislators and count votes, serving as ratification chairman for the city of Wilmington and ratification supervisor for the entire state. In anticipation of the special legislative session in spring, 1920, the group agreed to open a headquarters in the state capital, Dover. Robin handed the presidential gavel over to Mabel Ridgely. During the special session, she was an active advocate for ratification.

Once woman suffrage became part of the U.S. Constitution, Eva Robin turned to her interests in child welfare, education, juvenile justice, the Wilmington Prisoners' Aid Society, and the women's auxiliary of the Physicians and Surgeons Hospital. At the same time, her involvement in Jewish affairs increased; she gave her "executive talents" to the Wilmington Jewish Community Center and in 1924 became president of the Wilmington Council of Jewish Women, succeeding sister-suffragist Sallie Topkis Ginns. After Albert Robin's sudden death in 1927, she moved with her youngest child, Annette, to New York and began preliminary work on a biography of Dr. Robin. There, she developed an interest in the Marshall Stillman Movement, a program designed to divert young men from lives of crime through physical exercise.

Having retained a close interest in her native Russia, she grew particularly fascinated by the Soviet experiment, combining that interest with her concern for juvenile justice reform. In 1931 (accompanied by Annette) and again in 1934, she travelled to the Soviet Union to study Soviet education and the Soviet criminal justice system, keeping notes on her experiences and hoping to publish a book on the subject. She was unsuccessful, however, in interesting publishers in her manuscript. During the Second World War, her earlier travels and her role as director and host of "The Saturday Forum Lunch Group" at her Manhattan apartment brought her to the attention of the U.S. House of Representatives Special Committee on Un-American Activities (HUAC), headed by Martin Dies. In particular, the Committee cited the lunch group's stated hope for a "speedy victory and lasting peace the world over" as well as its sponsorship of a talk by the historian Herbert Aptheker as evidence that it might be a "communist front organization." In 1948, her "phone was tapped" and "an F.B.I. investigator came to see" her, requesting the names of speakers and the subjects on which they spoke. In 1953, reflecting upon her experience of "being investigated," she railed against the anti-communist crusade of Senator Joseph McCarthy and considered herself lucky to have escaped stricter scrutiny of her involvements.

Eva Halpern Robin spent her final years in New York, where she died on May 21, 1969.

Genealogical information on the Robin family can be gleaned from the vital records, decennial censuses, and genealogical materials found on Ancestry.com and FamilySearch.org. Local newspapers digitized via ChroniclingAmerica.org and newspapers.com, along with documents available on HathiTrust.org provide useful details on Eva Robin's suffrage work, civic commitments, and personal life. Photos of Eva Robin appeared in the Wilmington Morning News, June 27, 1919 p. 7; and Evening Journal, March 15, 1922, p. 18.

Eva Robin's Papers at the UCLA Library Special Collections include autobiographical reminiscences, copies of some of her suffrage speeches, a small scrapbook, notes for her proposed biography of Dr. Albert Robin, and diaries kept during her trips to the Soviet Union.
https://oac.cdlib.org/findaid/ark:/13030/kt5m3nc7mr/

Thanks are due to Amy Frazen for her assistance in researching Eva Robin's papers. 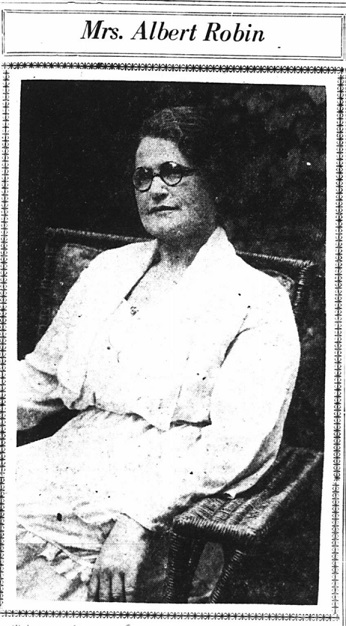