Elizabeth Sims, one of seven children, was born in 1884 in Tennessee to Thetus, a lawyer and later a Congressman, and Nannie Sims. The Sims family was prominent in Tennessee society. Well educated, Elizabeth attended Randolph Macon Woman's College in Lynchburg, VA and joined the Delta Delta Delta sorority; her allegiance to the Tri-Delt sorority she held throughout her life. She married Louis Brownlow, a journalist, in 1909 in Washington, D.C. Her husband's different jobs in public administration meant that they lived in a number of places: Washington, D.C., Virginia, Tennessee, New Jersey, and Illinois.

In Washington, D.C. her husband's appointment to City Commissioner unleashed a tide of activism in Elizabeth. She took on leadership roles in suffrage organizations. She served on the National American Woman Suffrage Association (NAWSA) Honorary Convention Committee in 1915. She became president of the Suffrage Federation of the District when it was founded in 1916. The group brought together all the suffrage organizations in the city, such as the Woman Suffrage Council founded in 1914 to assist the Congressional committee of NAWSA at its branch headquarters in DC. Activities of the Federation included raising money for suffrage campaigns in states and sponsoring suffrage speakers at meetings. In fact, in January 1917 she and her husband were listed as patrons of a suffrage meeting at which Ida Husted Harper spoke.

In 1918, Elizabeth, as president, pushed for a name change for the organization and the Equal Franchise League was born. The new group called for representation in Congress for the District of Columbia. (Note: today, the District of Columbia still lacks Congressional representation.) The new league heard from speakers at their meetings on topics such as a minimum wage, held teas to raise money for NAWSA and aided war efforts. Elizabeth served as one of the chairman for the war workers' appeal under the direction of the NAWSA, and established a Red Cross Auxiliary with a war relief workroom at NAWSA headquarters.

Elizabeth also focused her efforts on other groups of local women engaged in the war work. She served as a chairman of the drive for the Liberty Loan and sale of bonds campaign; its drive raised 3.5 million dollars. In recognition of the District's oversubscribing its Victory Loan quota, a vessel was named after the District of Columbia; Elizabeth christened the boat in 1919. She also chaired the woman's committee of the war saving stamps drive.

While Elizabeth was active in NAWSA's war work, more militant suffragists in the District were picketing the White House under the leadership of the National Woman's Party. We don't find surviving sources that speak to Elizabeth's attitude toward the picketers, but her husband, Louis Brownlow, as Commissioner for the District, was responsible for ordering the arrest of almost 200 picketers, principally charged with "obstruction of traffic."

Besides suffrage and war relief work, Elizabeth managed to find time to become involved in other efforts. The Salvation Army benefitted from her leadership capabilities; she served as chairman of the woman's committee of the home service fund drive which successfully raised money to finance future activities. Her interest in child welfare led her to the chairmanship of the child labor section of the Children's Year Committee of Washington which focused on school truancies, membership in the Juvenile Protective Association, and the chairmanship of the legislative committee for the DC tots health drive.

Elizabeth's influence on others contributed to the success of the woman suffrage amendment. Her father, Thetus Sims, was a member of Congress, representing a district in Tennessee. In 1915 Thetus Sims voted "NO" on the constitutional amendment that would have given women the right to vote. In 1918, when the vote was taken once again, Thetus Sims surprisingly cast an "AYE" vote, joining the majority. What had changed his mind? It is not a stretch to think that his daughter, Elizabeth Sims Brownlow, a fellow D.C. resident, had influenced his change of heart.

Her father played a second important role in the suffrage story. It is noted the day the Nineteenth Amendment passed in the Senate, it had to be discharged to the states for ratification. On his way to the Capitol, Thetus Sims fell and broke his collarbone, and instead of seeking medical assistance, he continued to his seat where he cast one of the deciding votes for discharge. His daughter's persuasive powers gave the nation a chance to ratify a woman's right to vote. In fact, her father referred to her as "his iron jawed angel daughter" and he voted for women.

The Brownlows relocated to Petersburg, Virginia in 1920, when Louis Brownlow took the position of city manager. Elizabeth never hesitated in her involvement in her new community. She joined the League of Women Voters (LWV) in Virginia, an organization, founded in 1920 to help women focus on political action and civic engagement. Elizabeth served as child welfare chairman and actively participated its conventions. At the LWV convention in 1922, she introduced a resolution for the U.S. to join the League of Nations.

In her home state of Tennessee, where the Brownlows moved in 1923, Elizabeth poured out her energies for women and social reform. She attended LWV state conventions and in 1925 as a delegate of the Knoxville League she addressed the woman's legislative council on the child welfare plan for the state. As the Knoxville News-Sentinel noted in 1923: "Elizabeth's heart set on welfare work, particularly the Associated Charities here which she was instrumental in founding."

She was appointed a member of the governor's Child Code Committee to draft welfare laws for presentation to the legislature. She also focused on the Tennessee State Social Workers, attending conventions, serving on committees and performing as secretary for state conferences.

The couple lived in Fair Lawn, NJ between 1927 and 1931. The 1930 census recorded the couple, still without children, and noted Louis's occupation a real estate advisor. They moved to Chicago in 1931, where Louis had taken up a teaching job at the University of Chicago and was appointed director of the Public Administration Clearinghouse at the University, a job he held until 1945. The 1940 census recorded the couple living in Chicago with Louis working as a Public Administrator. Elizabeth participated in the Illinois LWV with a focus on child welfare. She attended its annual statewide conventions and as chairman of the Child Welfare Department for the league, she presented the Child Welfare Legislative Program for 1933 at the December 1932 convention.

Credit for the following photo: "Suffrage Clans Are Gathering in Washington for Their National Convention." The Washington Times, December 9, 1919, p. 6. 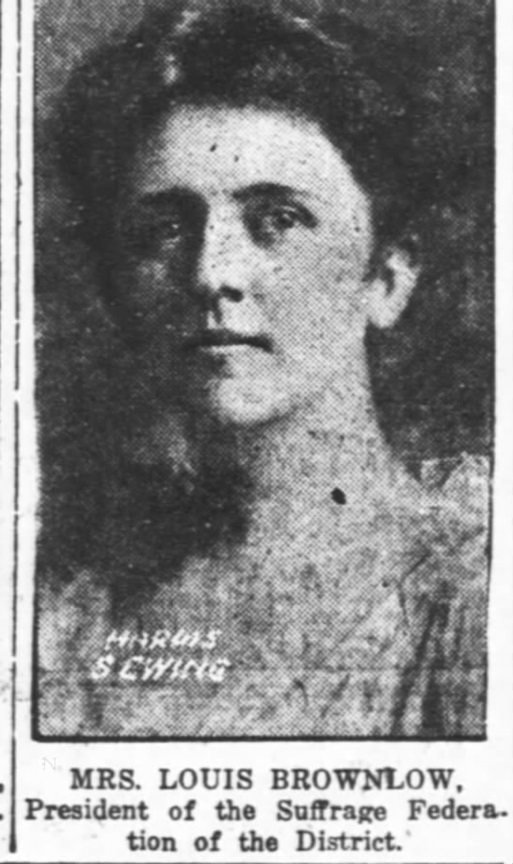 The account of the vote by Congressman Thetus Sims in 1918 was posted in Tennessee History on September 19, 2019 by Tom Humphrey, former News Sentinel Nashville bureau chief. Accessible online at http://knoxblogs.com/humphreyhill/2010/09/19/tn_womens_suffrage_history_bef/

"For Local Congressmen. Favored by Suffrage Federation of the District at Meeting." The Evening Star, January 15, 1918, p.9.

"Suffrage Clans Are Gathering in Washington for Their National Convention." The Washington Times, December 9, 1919, p. 6.—credit for photo of EB