Emma Ferdon Winner was born on January 20, 1855 in Plainfield, New Jersey and was the daughter of Sarah J. Taylor Winner and Reverend (Methodist) John Ogden Winner. She died on March 3, 1922 in New York City.

Emma Rogers was politically active and interested in social reform during her entire life. While at the University of Michigan, she helped to start the Collegiate Sorosis, the first professional women's club in the United States, and was involved in the Methodist Women's Home Missionary Society.

While at Northwestern University in Evanston, Illinois, Emma Winner Rogers helped create The University Guild, to bridge the "community gap between town and gown" and became the second President. Also, she was involved with Fortnightly Club, Chicago's leading woman's club founded in 1876. In 1892, she was a co-founder of the Northwestern University Settlement, and was its President from 1894-1900.

In New Haven, Connecticut, she continued to work on social and economic issues and on women's right to vote. Her name is on a plaque in the Connecticut's state capital (Hartford) acknowledging her and other suffragists for their work. She served as the treasurer of the National American Woman Suffrage Association from 1914 until her death in 1922. She also served on the NAWSA Finance Committee and was among the Connecticut Woman Suffrage Association delegates to the NAWSA Annual Convention in 1914. Other causes she was involved with include the New Haven's Model Housing Association, the Lowell Settlement House, the Women's Bureau of the Democratic National Committee and, during World War I, the Women's Overseas Hospitals Organization.

As a writer for political and social issues, she wrote numerous publications and a monograph titled Deaconesses in Early and Modern Church. Emma Rogers was a member of the American Economic Association from 1893-1919, at a time when social interests, including women's economic independence, were more prominent in the organization.

From reading biographical sources, Emma Rogers was thought of as a visionary, intelligent and influential among those who knew her.

I. Deaconess in the Early Church. II. Deaconesses in the Modern Church. Evanston: Index Company, 1891.

"Why not complete the enfranchisement of women," New Haven Equal Franchise League Broadside and in Christian Advocate, April 3, 1913.

Woman's Who's Who of America: A Biographical Dictionary of Contemporary Women of the United States and Canada (1914-1915). Edited by John William Leonard. American Commonwealth Company, 1914, p. 699. [LINK] 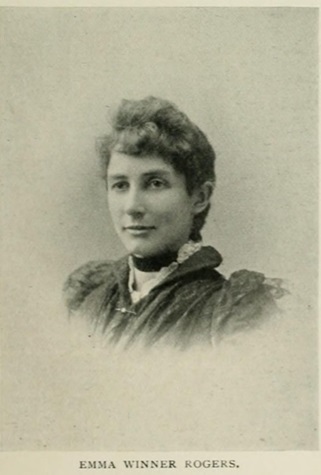 From A Woman of the Century: Fourteen Hundred-Seventy Biographical Sketches Accompanied by Portraits of Leading American Woman in All Walks of Life, p. 619.