"Prepare yourselves to be voters," Mrs. J. Frank Ball exhorted members of the Delaware Equal Suffrage Association at a "victory luncheon" held in Wilmington in June, 1919, not long after the U.S. Congress sent the Nineteenth Amendment to the states for ratification. Now vice-president of the Association, the sixty-year-old Mrs. Ball had come into suffrage work with a lengthy resume comprised of social, religious, and civic activism dating back to the 1880s. Throughout the efforts to convince Delaware's senators to vote for the Amendment in Congress, then press the pro-suffrage governor to call a special session of the state legislature for the purpose of ratification, and finally, make the arduous push to win ratification, Ida Ball served the Equal Suffrage Association as a convention delegate, member of its executive committee, and vice-president. Her spacious Wilmington home was often a staging ground for planning suffrage campaigns. In the end, the Delaware legislature refused to ratify the Amendment, accepting it only belatedly in 1923, when ratification no longer mattered much. After ratification, like many of her suffrage co-workers, Ida Ball joined the League of Women Voters. In politics, she was a Democrat.

Born Ida M. Perkins in Wilmington, Delaware on November 13, 1859, to Rachel Anne Strahorn and Benjamin F. Perkins, Mrs. Ball had a superior education for women of her time. She was a member of the first graduating class at Wilmington High School, then taught briefly before attending Cornell University.as a member of the class of 1882. On October 13, 1881, she married James Frank Ball, a graduate of Princeton University and an attorney and Wilmington city auditor. He later served as a Municipal Court judge and chaired the New Castle County Workhouse board of trustees. They had four children together: Jean (1882-1884), Beatrice (b. and d. 1884), Frances Ethel (later Staniar, 1885-1942), and Dorothy (later Schlatter, 1888-1973). Throughout most of Ida Perkins Ball's marriage, the family lived, along with Ida's sister Martha Perkins and a live-in servant, at 1019 Park Place in Wilmington, where she often hosted meetings of her various civic and philanthropic associations.

Prior to her suffrage involvement, Ida Perkins Ball lived a busy, active life, full of commitments to her voluntary organizations, church-related undertakings, speaking engagements, and civic duties. A life-long member of the Hanover Presbyterian Church, as was her husband, she was often called upon to take leadership roles in the congregation and the Baltimore synod, of which her church was a part, particularly in the realms of Home and Foreign Missions. As a young wife and mother, she participated in the work of the Wilmington Woman's Christian Temperance Union (WCTU) as it sought to establish a "Friendly Inn" providing "cheap meals" and "comfortable boarding" for young white women moving to the city. A more substantial—and consequential—commitment arrived in the summer of 1890, when she accepted an appointment to serve as one of Delaware's four commissioners on the Board of Lady Managers for the World's Columbian Exposition in Chicago and secretary of the Awards Committee. During her three-year term, Ida Ball travelled frequently to Chicago for meetings, encountered national and international dignitaries, solicited and collected Delaware-made items for display and for competitive judging, and tussled with other commissioners over such matters as whether to open the fairgrounds on Sundays (she voted no). A conflict over the appointment of jurors for awards given to women's submissions was so bitter that Mrs. Ball, described in the New York Times as "a pretty, black-eyed little woman," was removed from the Awards Committee. At home in Delaware, she was now in demand as a speaker, and increasingly visible in public forums offering her views on educational matters. In 1895, she delivered an invited lecture on compulsory education at the Atlanta Cotton States and International Exposition.

Soon, she combined her religious commitment to the Presbyterian faith with her concern for young white urban women workers by joining the board of the newly organized Wilmington Young Women's Christian Association (YWCA), founded in 1895. She became president (1898-1901, 1903-04) and then treasurer of the organization. Other affiliations followed, some of them with woman-only organizations, others with gender-integrated groups: Associated Charities, the Society for the Prevention of Cruelty to Children, the Humane Society, the Red Cross, the New Century Club. In these organizations, she worked closely with women who became her sisters in suffrage work, particularly Agnes Y. Downey, the YWCA's long-time general secretary, Emalea Pusey Warner, Gertrude Nields, and Emma Worrell.

Ida Perkins Ball's suffrage leadership emerged from her experiences in social, religious, civic, and educational activism. After volunteering as a delegate to the Delaware Equal Suffrage Association's 1915 convention, she was elected the group's second vice-president in 1917, then first vice-president in 1918. During wartime, she gave her skills both to the local women's branch of the National Council of Defense and to the suffrage cause. Under the Equal Suffrage Association presidency of her friend and co-religionist, Agnes Downey, she helped put together an impressive petition campaign in 1918 and place suffrage information in local press outlets. When Downey stepped down from the presidency in 1919, the organization became newly energized under the leadership of Eva Halprin Robin. Prodding from NAWSA's national office, and the excitement accompanying Congressional passage of the 19th Amendment played a part, too. During those heady times, the Delaware Equal Suffrage Association's executive committee often met at the Ball home. It was there that the June, 1919, victory luncheon was planned, a ratification committee set up, and a program arranged for the group's 1919 convention.

During the epic ratification contest in Dover in the spring of 1920, Ida Perkins Ball remained in Wilmington. After recovering from an illness that required hospitalization in the summer of 1920, she attended the first League of Women Voters convention in Wilmington in September. The onset of another illness in December of 1928 led to her death on January 31, 1929. Her funeral was held at her beloved Hanover Presbyterian Church, presided over by the church's pastor Charles H. Bohner. J. Frank Ball died the following year; both were buried at Wilmington and Brandywine Cemetery. 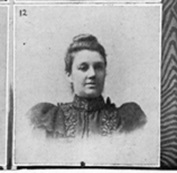 Photo of Ida Perkins Ball from "Members of the Board of Lady Managers," World's Columbian Exposition, reprinted in Weimann, The Fair Women, p. 571.

Genealogical information on the Perkins and Ball families can be gleaned from the vital records, decennial censuses, and genealogies available on Ancestry.com and FamilySearch.org. Local newspapers digitized via ChroniclingAmerica.org and newspapers.com provide a great deal of information on Ida Perkins Ball's personal life, professional undertakings, and suffrage work, as well as on her travels and her family. At the New Castle County Register of Wills Office, Wilmington, Delaware, File #11122 includes a brief summary of her assets at death. She died intestate.

Both Ida Ball and her daughter Ethel Ball Staniar are included in the brief biographies found in Woman's Who's Who of America (New York: American Commonwealth Company, 1914). The biography incorrectly lists Ida as an anti-suffragist.