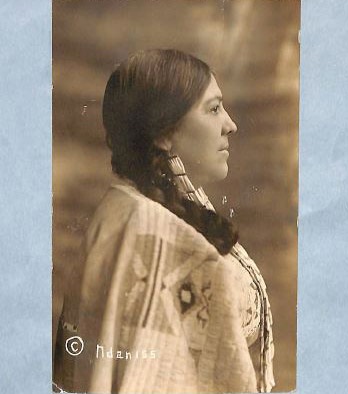 Marie Louise Bottineau Baldwin, is pictured in her personnel file photo for the Office of Indian Affairs (ca 1911). (National Archives at St. Louis, Records of the U.S. Civil Service Commission).

Baldwin was born in Pembina, North Dakota, to Jean Baptiste Bottineau and Marguerite Renville in 1863. Her early education included a school in Minneapolis, St Joseph's Academy in St. Paul, and St. John's School-Ladies' College, in Winnipeg. Her father was a lawyer and she worked with him as a law clerk when they went to Washington, DC in the 1890's to defend the rights of the Turtle Mountain Chippewa Nation.

In 1904, President Roosevelt approved her appointment to the Department of Indian Affairs. She worked full time as an accountant with the Education Division of the U.S. Indian Bureau during the day, and took night classes at Washington College of Law (Washington D.C.). She completed her degree, which typically took three years, in just two years. She was the first Native American student to graduate from the Washington College of Law, and was admitted to the bar in 1914. In an interview with her soon after she received her law degree, she states "Did you ever know that the Indian women were among the first suffragists, and that they exercised the right of recall?"

She celebrated and promoted Native identity at a time when the government promoted assimilation, and wore traditional dress in her personnel photo taken in 1911. She was active in the Society of American Indians (SAI), acting as treasurer and speaking at events. At an event in 1915 she was quoted as saying "The practical problems of life that the Indian woman meets are essentially identical with those the white woman confronts, and their treatment should be identical."

Interviewed before the 1913 suffrage march in Washington DC, Baldwin stated "As for the Indian women they have had virtual suffrage, also the power of recall, since time immemorial. Whenever they were dissatisfied with a chief of the tribe, all they had to do was to make their wishes known and he was promptly "recalled." And as to voting, I do not know that they exercised the right often, but it amounted to the same thing for they would inform their men what they wanted and the result of the election usually showed that their wishes had prevailed." She marched in the parade with other female lawyers down Pennsylvania Avenue, struggling to "walk four abreast through a defile no wider than a single car track as the unruly crowd surged into the parade route."

Many Native Americans were not legally allowed to vote until the passage of the Indian Citizenship Act on June 2, 1924. Baldwin died in Los Angeles in 1952.