Edna Leighton Tyler was born in January 1879 in Norwich, Connecticut to Colonel Augustus C. Tyler and Cornelia Osgood Tyler, a librettist and lyricist. After living in Washington DC and New York City, Tyler made New London, CT her home. Tyler did not marry or have children.

In the 1910s, Tyler dedicated her time to the suffrage cause. She acted as the New London County Chairman for the Connecticut Woman Suffrage Association until 1920, and as president of the New London Equal Franchise League.

After the right to vote was won, Tyler remained deeply engaged with the League of Women Voters. At the state level, she was Director-at-large on the Connecticut LWV executive board throughout the 1920s and 1930s. Her home at 36 Gardner Avenue, New London served as one of the board's meeting places. Locally, she founded the New London LWV and kept it under her leadership for no fewer than 45 years.

To honor her extensive work with the League of Women Voters, the New London LWV established the Edna L. Tyler Award recognizing students of Mitchell College, New London "demonstrat[ing] an awareness of the principles of self-government established in the Constitution of the United States and an interest in the promotion of political responsibility through informed and active participation of citizens in government." Even in advanced age, Tyler bestowed that award in person to the recipient.

Her other charitable service included the local Red Cross association and the preservation of Pequot Chapel, New London. Tyler also held an interest in photography, as is evidenced by the number of her published landscape and portrait photographs that have accompanied articles in The Hartford Courant. After a long life of service, Edna Leighton Tyler passed away on August 31, 1970 at 91 years of age. The inscription on her grave reads "A Dedicated Life". 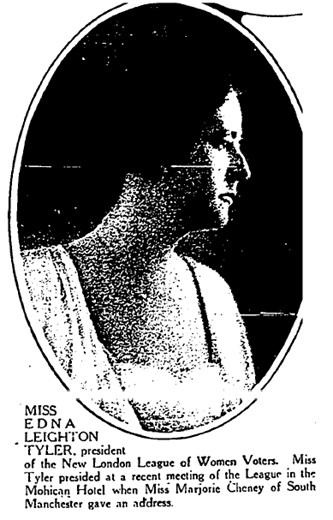