Althea Luetta Harmer was born May 4, 1884 in Linn, Washington Co., Kansas. She came from a family of archetypal settlers, farmers and carpenters. Her maternal grandfather, Michael Boyer, became a casualty of the Civil War in 1863, leaving behind a widow and children including twins, aged two months. Following his death, his widow, Rachel Elizabeth (Troup) Boyer, married Newland M. HARMER in 1866.

Daughter of Michael and Rachel Boyer, Sarah Miranda Boyer, grew up in Kansas and gave birth to Althea before marriage. Althea came from Kansas to California with the family in the 1890's and lived her formative years in Sonoma County with Grandma Rachel Harmer. Althea and Grandma Harmer accompanied a large group of extended family from Kansas to Oregon in the early 1890's. They lived for several years in Rainier, Oregon. At the age of 9 years she demonstrated perfect attendance as one of 29 pupils in her Aunt Mary E. Harmer's class. By the late 1890's most of the family had left Oregon for California, where Althea lived in her formative years.

Althea graduated from the Santa Rosa Business College in 1903. Soon afterwards she was employed by the Sebastopol Times newspaper as a typesetter. Being an independent and progressive woman, Althea made property purchases in the Murphy and Brittain additions of Sebastopol at the age of 23. As an unmarried woman and property owner, Althea wanted rights that were denied her. As a taxpaying property owner, she presented a compelling argument for suffrage. She was an active member in her church and the Woman's Christian Temperance Union (WCTU).

At the 27th annual Sonoma County WCTU Conference, Althea read a paper on the suffrage question. The meeting was held at the Christian Church in Petaluma on September 12, 1911. Both the Press Democrat and the Petaluma Argus reported the following on the speech.

Her paper stated two important questions; Why Do I Want Suffrage? and What Will I Do With It?

"First, I want the ballot because it is right; as a woman I pay taxes and obey laws.

Second, I want to vote because I believe it is my duty, as much as in me lies, to help make this world a better and safer place in which to live."

"What will I do with suffrage when I get it?" "Use it first in regard to local matters, but I will not stop there. I believe most of us are as well informed on national questions as our brothers, and if we are not, it will broaden and make us more thoughtful if we learn."

She dwelt on the duties of motherhood and added that there is but little encouragement for mothers to bear and rear children and then not be allowed to aid in making and enforcing laws for their protection and uplift.

Her paper made a great impression and was heartily applauded.

At the age of 26 Althea married Samuel S. Focht of the Hessel Station in the Analy Township. At age 29 she gave birth to the first of her three children. The family made their living at poultry farming for more than two decades in Sonoma County before settling in Tehama County, California.

Althea was a lifelong participant in community groups and the WCTU. At the age of 55 she held the office of President of the Cotati Ladies' Aid Society and at the age of 71 years she was still active at WCTU functions.

Althea lived to age 88 and is at rest in the family plot at Los Molinos, Tehama County, California. Her family remembers her as a"quiet, gentle, warm hearted woman."

The Sebastopol Memorial Lawn is the final resting place of many relatives who helped foster her including her grandmother, Rachel Elizabeth Troup Harmer, and the Shatto and Lunceford families. 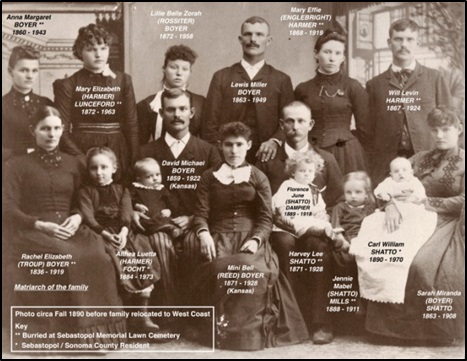