"The Woman's Christian Temperance Union (WCTU) stands for the complete abstinence from alcohol, tobacco, and all harmful drugs and protection of the home."

Antoinette S. Crandall was born on a farm in Pennsylvania on September 7, 1842. She was one of seven children of Daniel Crandall and Isabel Morey. In 1853, the family moved to Michigan and then a few years later to Illinois, eventually ending up in the Rockford area of Illinois.

On September 25,1861, at the age of 19, Antoinette married Andrew J. Wheeler in Ogle, Illinois. Wheeler was employed as a drayman. In 1871 they have their first and only child, a daughter they call Frances Lydia. They continued to live in Illinois raising Francis until 1887 when the family moved to Santa Rosa, California. In Santa Rosa, Andrew opened an appraisal and second hand furniture store at first located on the Hahman block and later on Third Street in downtown Santa Rosa. Their house, a charming Italianate cottage built in the 1880's was nearby on Cherry Street. Sometime after Frances married Henry G. Matthias in 1889 and moved to Healdsburg. Antoinette became involved with the Sonoma County chapter of the Woman's Christian Temperance Union. In 1894 she was elected president and served in that position for the next 10 years during which she was a delegate to the State Convention in 1894 and 1895. Sonoma County W.C.T.U. meeting discussions covered many issues including "the problem of idleness and poverty" that could be traced back to drinking, removal of all saloons in California, the pros and cons of if "the wife and mother needs the ballot," and Susan B. Anthony's message that women should work persistently for equal suffrage.

On December 18, 1902, "franchise" was the subject for discussion at the regular meeting for the W.C.T.U. held at the home of Mrs. A.J. Wheeler at 813 Cherry Street. Also, at the Wheeler home was the establishment of the first Santa Rosa Equal Suffrage Association on December 20, 1904, with Mrs. A. J. Wheeler serving as president. On May 16, 1905, the Suffrage Association met again at the Cherry Street home of Mrs. A.J. Wheeler. Antoinette's husband, Andrew died on April 2, 1906 died - just two weeks prior to the earthquake that virtually destroyed the area in and around downtown Santa Rosa. Mr. Wheeler's obituary describes him as a man with fine principles and strong character; who had provided his wife with assistance in her role as president of the W.C.T.U. By this time, their daughter Frances had moved to Southern California with her second husband, Ernest J. Gookins, and it probably wasn't a hard decision between the shock of losing her husband along with the earthquake for Antoinette to leave Santa Rosa and move to Los Angeles in April of 1906. 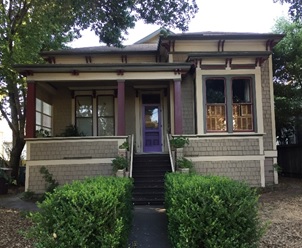 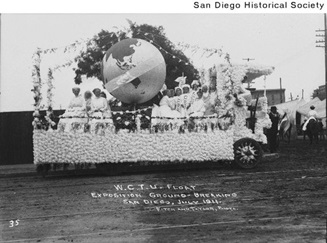