Leda Richberg was born in Chicago in November 1886. Her mother and grandmother were both physicians; her father was a lawyer. She trained as a pilot at the Wright Flying School in Dayton, Ohio and in June 1914 passed her pilot's licensing test.

Leda Hornsby's first recorded suffrage activism came in December 1916, as she prepared to fly a biplane and drop woman suffrage petitions and flyers from the plane as she flew over President Woodrow Wilson's yacht sailing down the Hudson River to a ceremony at the Statue of Liberty. Windy conditions, though, forced Hornsby to give up the mission and required her "to make an emergency landing in a Staten Island swamp."

The next year she was active in the picketing of the White House for women's suffrage. On November 10, 1917, she was arrested along with many other women. She gave her name to authorities as Mrs. L.H. Hornsby, but no further information on a marriage has been found. It is said that Hornsby attempted to pull a guard off of fellow picketer Dorothy Day the day she was arrested. Accounts vary as to her treatment. One says she was sentenced to thirty days in the "district jail," which was not as harsh of a punishment as being sent to the workhouse at Occoquan. But a New York Times article (Nov. 28, 1917) suggests she was imprisoned at the workhouse, participated with others in a hunger strike, and was released early on November 27.

Richberg-Hornsby died in Chicago in 1939.

"The 'Suff Bird Women' and Woodrow Wilson," on the websitge of the New-York Historical Society, accessible online at http://blog.nyhistory.org/the-suff-bird-women-and-woodrow-wilson/.

From the book Jailed for Freedom by Doris Stevens, Mrs. L.H. is pictured on the far right. 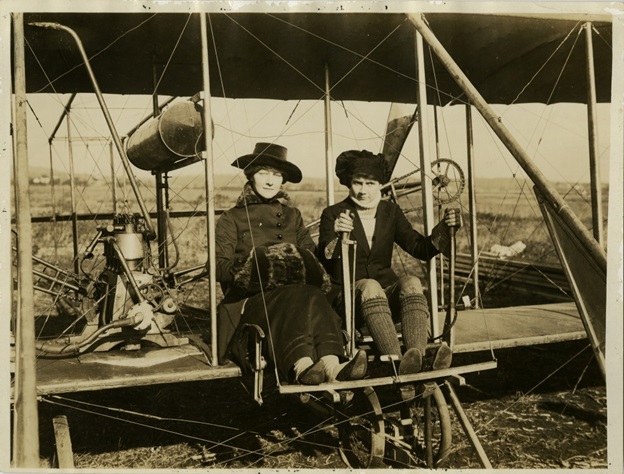 Ida Blair (left) and Leda Richberg-Hornsby in the two-seater biplane poised to make their unsuccessful flight to "bomb" President Wilson with woman suffrage petitions. Weather conditions did not permit the suffragists to complete their mission.