Delaware suffragist Elizabeth Bussier Stirlith's enthusiasm and hard work for the suffrage movement was only outshone by her devotion to the Single Tax movement. Born in Philadelphia in 1877, Elizabeth Bussier was from a family of shopkeepers. Her father Wesley T. Bussier operated a cigar shop while her mother, Rebecca Smith, came from a family of capmakers. Her family did have interests beyond business. Her grandfather Bartholomew Bussier was an ink merchant and ardent Adventist who published a newspaper of his prophecies, The American Quarterly Journal of Prophecy, as well as lecturing and publishing pamphlets. Her father joined the 1859 silver rush to Virginia City, Nevada but returned to Philadelphia a few years later having failed to strike it rich.

Elizabeth attended Girls High School in Philadelphia and then the Philadelphia Normal School, a teacher training school for young women. After graduating in 1897 she worked as a teacher and principal of the Edward Shippen School in Philadelphia until her marriage. She also worked in her father's cigar store. In 1900 she met Francis T. "Frank" Stirlith, a former professional baseball player from Wilmington, Delaware who regularly came to Philadelphia to attend meetings of Henry George's Single Tax movement. Henry George, a Philadelphia political economist, was the founder of a popular economic movement, which argued that the most equitable method of taxation is a tax on the unimproved value of land. Frank and Elizabeth attended Georgist meetings together and were married by the pastor of Wilmington's St. Patrick's Roman Catholic Church on September 1, 1902.

The Stirliths moved into a house on Washington Street in Wilmington's Ninth Ward. Frank worked in the Stirlith family's scrap metal business, initially for his brothers, although eventually he owned his own scrap business. In 1904 Elizabeth gave birth to their only child, Eugene Wesley Stirlith, named for Frank's and Elizabeth's fathers.

Elizabeth Stirlith was involved in the Delaware suffrage movement by 1914, serving as an officer and founding member of the Ninth Ward Suffrage Association. She was a member of the Congressional Union (CU) by 1915, working at the Equal Suffrage booth at the 1915 Delaware State Fair and attending CU meetings in Wilmington with Frank's sister, Annie Stirlith McGee. In 1916 she was a member of the nominating committee for the Congressional Union. Along with Florence Bayard Hilles and Annie Melvin Arniel, she joined the Delaware delegation at the March 4, 1917 demonstration at Woodrow Wilson's second inauguration in Washington D.C., in which suffragists marched around the White House in the pouring rain. In 1918 she was the suffrage chair and head of the circulation committee for the Delaware chapter of what had become the National Woman's Party (NWP).

Personal tragedy interrupted her suffrage work when her only child, Eugene, died in the Spanish influenza epidemic on November 19, 1918 at the age of 14. But less than a month later, on December 16, 1918, she and her sister-in-law Annie McGee were among the suffragists who burned President Wilson's speeches at the NWP's "watchfire" protests in Lafayette Square. In the spring of 1920, she joined the suffragists who rallied in the state's capital, Dover, in the failed attempt to convince the General Assembly to make Delaware the thirty-sixth and deciding state in the ratification process.

Elizabeth Bussier Stirlith continued her political activism after the ratification of the 19th Amendment. In 1920, the first election in which Delaware women were eligible to run for state-wide office, she was one of several women candidates, running unsuccessfully for state representative for Wilmington's Ninth Ward on the Independent Party ticket. In subsequent years, she ran unsuccessfully several more times on third party tickets, including as a candidate for the state Senate in 1922 and Wilmington city treasurer in 1923 on the Forward Party ticket and for presidential elector in 1924 on the Progressive Party ticket. After 1921, her involvement in the National Woman's Party faded.

The Stirliths moved to Bellefonte, just north of Wilmington, sometime before 1927, where Elizabeth became active in the local civic association. She and her husband maintained their life-long enthusiasm for the Single Tax movement, which had brought them together, attending Georgist meetings and distributing literature. At the age of 76, in a 1954 letter to a Georgist newsletter, she described her continuing efforts for the movement, handing out literature and discussing Georgism with visitors to her home. Among her prize possessions were a teapot previously owned by Henry George and a bust of her son by sculptor Frank Stephens, one of the founders of Arden, Delaware's Single Tax community. Her husband Frank died in 1969 and Elizabeth Bussier Stirlith died in Wilmington on April 19, 1974 at the age of 96. She was buried in Riverview Cemetery.

An oral history interview with Frank T. Stirltih contains some limited information on his wife Elizabeth, including how they met in Philadelphia. There is information on Elizabeth Stirlith in the recording that has been edited out of the transcript:
Interview with Frank T. Stirlith, 1960 January 12, 1960 January 14. 2026_060413_07/Box 2, Eleutherian Mills-Hagley Foundation interview transcripts on the history of the DuPont Company Powder Yard (Accession 2026), Manuscripts and Archives Department, Hagley Museum and Library, Wilmington, DE 19807. https://digital.hagley.org/2026_060413_07

Elizabeth Bussier Stirlith was a dedicated writer of letters to local newspaper editors on suffrage, the single tax, and electoral reforms. Her letters on suffrage published in Wilmington newspapers include:
"A Boom for Lynch," The Evening Journal, April 25, 1918, p. 3.
"Federal Amendment, Part Women Not Enfranchised Are Taking in Winning the War," Wilmington Morning News, April 30, 1918, p. 4.
"Saulsbury, Organized Labor and Suffrage, "The Evening Journal, November 15, 1918, p. 11.

Census and vital records available on ancestry.com provide details on Bussier/Stirlith family, including their residences and marriage and Eugene Wesley Stirlith's death. 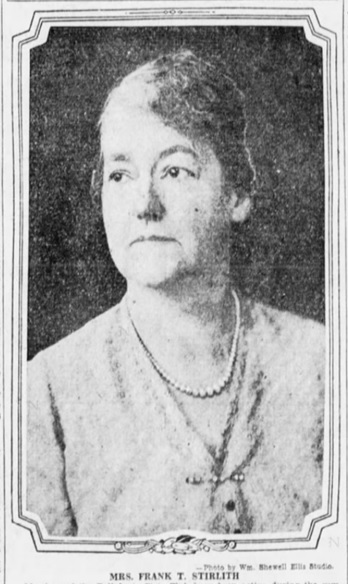