Anne Rothenberg was born in Meridian, Mississippi, on October 1, 1887, the daughter of one of Meridian's developer families; her father was Levi Rothenberg, was a department store executive and community leader. He co-founded the Emporium department store in Jackson, Mississippi, and the Marks-Rothenberg Company in Meridian. Her mother Amelia “Millie” Ritterman Rothenberg arrived in Mississippi from Syracuse, New York, at the age of eighteen and dedicated her life to cultural, business, and civic affairs. The Rothenbergs were prominent members of the Beth Israel Temple and instilled the importance of service in their daughter, who in return dedicated her life to those principles.

From an early start, Anne Rothenberg found her calling in education and civic service. She graduated as the valedictorian from Whitfield High School in Meridian, in 1903. She then attended Barnard College in New York City and was a member of the class of 1908. She stayed active in college by serving as class treasurer, a member of the Athletic Association, and taking part in multiple theater productions. She undoubtedly stood out as the only student in her class from a southern state, while her caring disposition is shown by her senior quote: “And for each passer-by a smile, for everyone a word.”

Rothenberg's smiles, words, and dedication for service only increased after graduation from Barnard College. In 1909 she returned to Mississippi and was one of three that represented the Sabbath School of Temple Beth Israel in the Mississippi Jewish Sabbath School Association and also in the Jewish Religious Teachers Convention. Not only did she serve her religious community but also her civic community. After graduation she returned home to serve as hostess to many community clubs such as the Dixie Club, the Swastika Club (this club was centered on literature and scholarship with a different meaning before the first World War), and the little Fortnightly Club. The little Fortnightly Club embodied Rothenberg's particular passions as it focused on intellectual and social culture. This is evident in her paper titled, “Ibsen, The Political Reformer,” which she presented at a club meeting at the age of twenty-three.

By 1916, Rothenberg was an active member in the Mississippi Federation of Women's Clubs (MFWC). She took on new leadership roles in 1917 to push for women's equal right to vote and showed support in service to collaborating groups. As president of the third district of the MFWC, Rothenberg reintroduced the resolution to formally endorse woman suffrage, which passed almost unanimously. During this time, she also published notices in numerous newspapers to call for the need of women organizing. Rothenberg organized classes in each community or neighborhood, where sufficient number of women existed, in home, gardening, food supply, telegraphy, wireless, aviation, automobile, sewing, first aid and Red Cross work, bookkeeping, and stenography. Seemingly, she found her calling in the MFWC as it embodied her fight to address the diverse needs of local communities, recognize women's achievements, promise literacy for children and adults, and encourage good health practices. The MFWC was not her only crusade during this time. Also in 1917 she served as chairman of her local Red Cross Chapter where she worked hard to inaugurate a goal of 5,000 new members.

On August 30, 1918, Anne Rothenberg married Ike Rosenbaum in New York City, and in the following years expanded their family. Son Ike Alfred arrived in 1920, daughter Maud followed in 1924, and then son Sidney four years later. Influenced by her new role in motherhood, the now Mrs. Anne Rosenbaum shifted her energy and focus to education and betterment of parent and school relationships. Rosenbaum attended Peabody College in Nashville, Tennessee, during the summer of 1934 where she studied with teacher training groups emphasizing teacher preparation. Also that year, Rosenbaum held the positions of first vice president and chairman of education in the Parent Teacher Association of Mississippi.

Not one to slow down, two years later Rosenbaum served as the president of the Parents and Teachers Association of Mississippi. She led conferences to create co-operations of the Department of Education and the PTA in which to establish better parent education work. While on the committee of the Mississippi Congress of Parents and Teachers, she brought to light the need of school legislation to raise Mississippi's educational system as there continued to be a need for increased salaries, greater state support, assured school terms, higher teacher qualifications, and teacher tenure and retirement law. Safety education also stood as a focus point. Rosenbaum's leadership put forth interest in a study of traffic safety and traffic safety legislation. This included the passage of a uniform Drivers' License Law. She also saw the importance of the home as a character building agency. She fought to secure better motion pictures for children and to obtain related enactment of Federal legislation. Rosenbaum proclaimed that change started at home and emphasized the necessity of fathers as PTA members. She stated that together the PTA must “not reform, but form, mentally, morally and spiritually” adolescents. At the 26th Annual Congress of Parents and Teachers in 1937, Rosenbaum expressed to 100 delegates and visitors a hope to build a brave new world for future generations. She explained that the “greatest obstacle to any movement is indifference,” and together parents and schools must realize and understand that, “no child is safe until all children are safe” to add that “there can be no security without character training, the moral and spiritual foundations of security.”

Rosenbaum continued to push these issues and spoke on them frequently at conferences and conventions. For example, she spoke on the responsibility of school of home safety at the Southern Safety Conference in 1939. Then at the 1942 Parent Teacher Association Convention, Rosenbaum, while on the program committee, helped arrange the discussion on subjects such as physical wellbeing and the school lunch program, the possibility of closing the schools for the duration and mental wellbeing. Her dedication to service throughout her life did not go unnoticed. The Clarion-Ledger newspaper eloquently stated that, “Mrs. Rosebaum has served the state, most capably and has endeared herself to hundreds of PTA members throughout Mississippi. She has a charming manner and presents her subject with sincerity and comprehension.” Her services to the state included the honor of being a past president of the Mississippi Parent-Teacher Association, former member and past president of the board of trustees of the Meridian Separate School District, a charter member of the Lauderdale County PTA chapter, American Red Cross, and the Little Fortnightly Club. She was also the president of the Temple Beth Israel Sisterhood and charter member of the Lauderdale County Mental Health Association and Family Service. On January 23, 1967, Anne Rothenberg Rosenbaum died in her family home at the age of seventy nine.

A photograph of Annie Rothenberg while at Barnard College can be found in the Mortarboard, Barnard College yearbook, 1908, page 184 at https://digitalcollections.barnard.edu/object/yearbook-1908/mortarboard-1908#page/184/mode/1up. This photograph of Rosenbaum appeared in the Clarion Ledger (Jackson, Mississippi), January 22, 1939, on page 3. 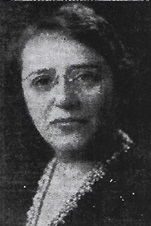 “Rothenberg dies at 70 in Meridian.” Clarion-Ledger (Jackson, Mississippi), May 9, 1960, p. 1. Available through Newspapers.com.

“The Graduating Exercises.” The Meridian Press (Meridian, Mississippi), May 9, 1903, p. 3. Available through Newspapers.com.